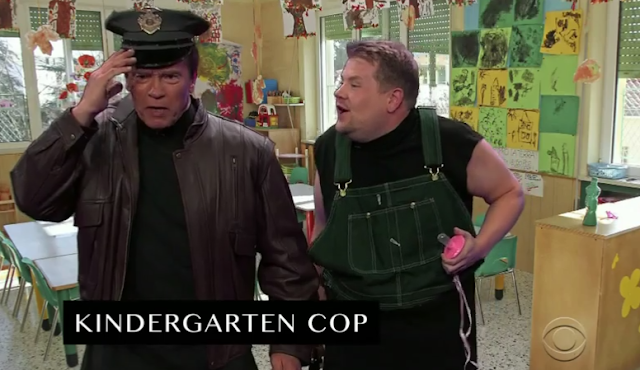 Arnold Schwarzenegger made an appearance on the Late Late Show with James Corden last night and revealed a surprising pick when asked about his personal favorite film. The lead-in to the interview was a 6-minute reenactment montage of his films which was pretty hilarious.

During the interview, Corden asks him which was his favorite and he says Kindergarten Cop. Really? With all the iconic '80s action films under his belt, I was taken back that he would choose a comedy over something like The Terminator. Watch this video to get his full answer...

I would think successful action stars typically go through that "I wanna try comedy" phase at some point during their career. Few can make it work and his success with Kindergarten Cop,  Twins (which I just watched on Netflix the other night), and others proves he can cross that line when he wants to. Also check out Arnold's reflection on the Terminator legacy during last night's interview.