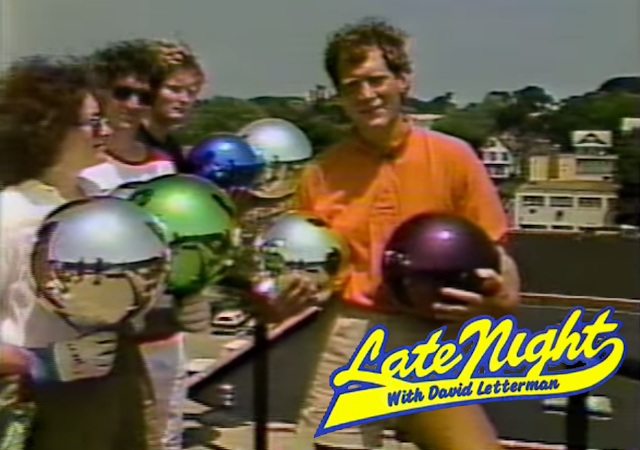 As David Letterman says goodbye to the Late Show this week, let's rewind back to the '80s (when the show was called Late Night) and rediscover some of his classic bits. His childish and absurd segments in his early years were the foundation of the 6 Emmy awards the show received in the '90s.

One of the classic bits on Late Night was destroying stuff. Whether it was on top of a 5-story building or in front of 90-ton hydraulic press, Dave's destructive power was always good for a laugh. The gag would continue with his journey to the Late Show but mainly passing the damaging duties over to his staff. I remember staying up to watch during my high school years in the early '90s and then asking my pals the next day questions like "Hey, did you see them drop a bowling ball into the bathtub of pudding last night?" If you were easily amused like me, watching these calamitous events scratched a major "what would happen" itch. Here are some of best smashing, crushing, and destroying moments from Late Night with David Letterman.

Dave throws stuff off a 5-story roof including a bowling ball, a jell-O mold, and a flaming bag of flour soaked in gasoline.


The dropping fun continues with a keg of nails, a frozen turkey attached to a parachute, and a roof clearing finale for the ages.

This final dropping segment includes a bag of peat moss, a bowling ball on a trampoline, and a lawn ornament finale you won't want to miss.


The destructive power of Late Night continues with a couple trips to a warehouse in NJ to crush the competition. Using a 90-ton press, Dave flattens a bowling pin, a plate of jelly doughnuts, and a dollhouse full of tomatoes.


More pressurized fun with an athletic supporter, Mr. Potato Head, and a canned ham put to the ultimate test.


Dave's antics also involved a steamroller running over bowling trophies, squashing Paul Shaffer's glasses, and trying to get that last little bit of toothpaste out of a tube.


Our final destructive bit from Late Night features a 3,000-pound block being dropped by a crane onto various items including a football helmet full of Jello, a cases of cap gun caps, and a lovely mannequin couple having dinner.
Newer
Older
Powered by