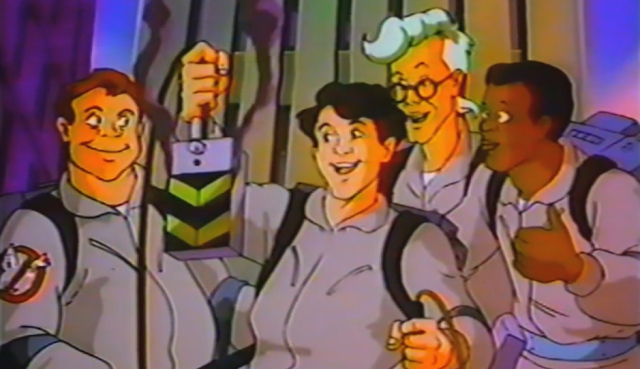 In September 1986, two animated Ghostbusters shows battled for adolescent viewership on American television. After a dispute with Columbia Pictures, Filmation created an animated series based on the their 1975 live-action Ghost Busters show. When negotiations fell through Columbia hired DiC Entertainment to produce a show that would continue the adventures of the popular 1984 film.

The animated war was clearly won by The Real Ghostbusters show, airing 173 episodes including two spinoffs compared to the standard 65 episodes produced by the Filmation show. Thanks to a recent Nerdist article, I stumbled onto the unaired pilot promo for The Real Ghostbusters! It's basically a 4-minute introduction to the show using the popular theme as the background and featuring several ghostly encounters. Fans of the animated series will notice a few subtle differences like matching uniforms and a Slimer character more like the ghost in the feature film. For fans of the show, this should be a real Stay Puft treat! Enjoy!