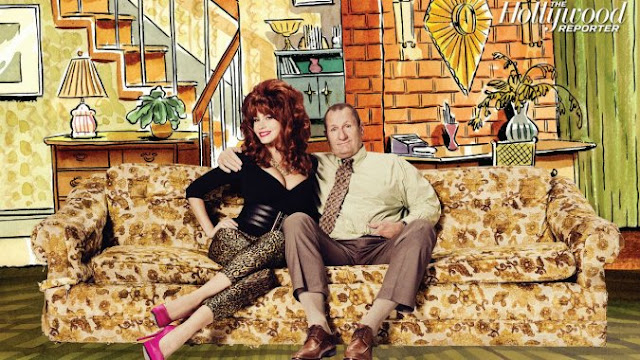 Actors for the popular ABC comedy Modern Family will be dressing up as characters from classic TV shows for the upcoming list of "Hollywood's Top 100 TV Shows" on The Hollywood Reporter. The first photo released was teased about a week ago by Sofia Vergara on Instagram who showed us her Peg Bundy side.

We now see that her imitation was for a shoot with Ed O'Neill as the Bundys from Married...With Children. The new photo features the couple sitting on a god-awful, patterned couch with a drawing of the Bundy living room in the background. Of course, O'Neill's channels his inner Al with a hand down the front of his pants.

The photo was also featured on Vergara's recent appearance on Jimmy Kimmel Live! where she also talks about watching Married...With Children as a little girl in Columbia. Expect more fun photos from the Modern Family cast including their interpretation of Cheers and Breaking Bad.