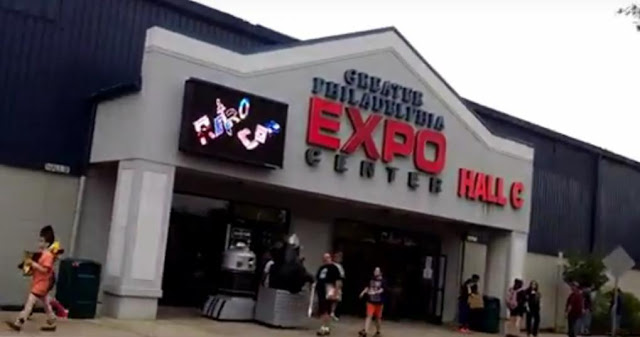 (Jason's note: My longtime friend (and RD80s contributor) Wyatt Bloom and I had the awesome opportunity to attend Retro Con 2015 this past weekend thanks to our Agents of M.A.S.K. website. We are planning several posts to recap our fun experience including photos of the cosplayers, vehicle encounters and much more! We begin with Wyatt's walkthrough and recap!)

As many of you know, Jason and I have been friends for many years. We grew up together in the '80s and finished school together in the early '90s when we parted ways to start our careers. Thanks to Retro Con, we rejoined forces and began preparing for the weekend.

Beginning with picking up my friend from the airport and an '80s playlist prepared for the trip, we transition to our journey from Maryland to Oaks, PA for our first Retro Con adventure. Getting our groove on for two and a half hours on the road, we finally arrived at Hall C with an Ecto-1A (Ghostbusters II) making us both smile. 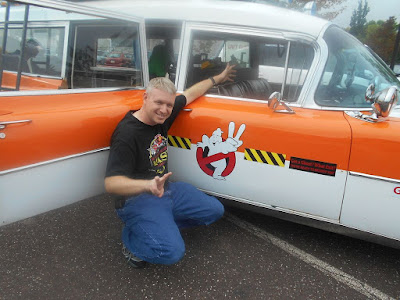 Both of us walked up to the Ghostbusting mobile and took photos with this great vehicle that included proton packs in the back. Afterwards, we walked through the entrance to grab our press badges from the staff and to begin our excellent adventure. 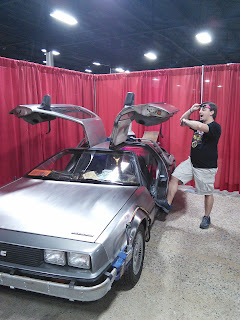 Walking into the hall, we were greeted by a very cheerful woman who welcomed us with "Welcome to RetroCon, enjoy your day." From there, we both looked at each other going, "where do we even begin?!" Surveying the nostalgia of our youth, we quickly decided to set up for our mission at hand which was dropping off printed material we created for M.A.S.K. voice actor Doug Stone to autograph and flyers about the online M.A.S.K. fan community.

Trekking to the voice actor tables at the very back of the hall, we were salivating over all the merchandise and pondering if we should take out a loan. Nonetheless, we were able to stave off the temptation for the time being and found a good M.A.S.K. friend of ours, Bill Faries of the Matt-Trakker.Com website. Shortly after our greeting, Jason peered over and his eyes captured the DeLorean Time Machine from Back to the Future. We basically lost him for awhile as he was glued to that car like I am to the General Lee. I captured several photos of him in the car as he struck a pose as well as inspected the car in amazement.

While he remained in the car, Bill and I went over to Doug's table to set up and while we were there, we looked at all of the other voice actor tables. We were all anxiously anticipating a small entourage as the actors showed, yet they trickled in as normal men. We warmly introduced ourselves and shook hands with Doug Stone. Jason finally pried himself out of the Time Machine and came to give him the Doug Stone/Matt Trakker print collage to use for autographing. He joked and greeted us all and shortly afterwards, we promptly asked for our photos with Doug. 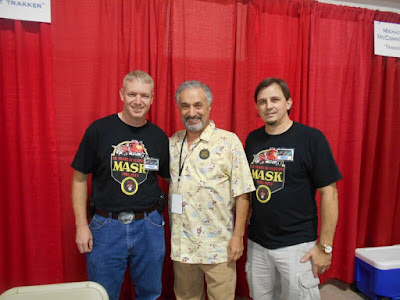 Still gleaming from our meeting, Jason and I decided to make a loop around the tables to see what else was afoot. We started with the Ghostbuster's table where two Ghostbuster groups from Philadelphia and New Jersey joined forces and displayed their very detailed assortment of equipment such as the PKE meter, Proton packs, Traps, the large Nintendo control for the Statue of Liberty, and a kids area to create the main ingredient of Ghostbusters, slime! From there it was on to Bill and Ted's phone booth where Jason and I rocked our best impressions with the ever stylish sunglasses. 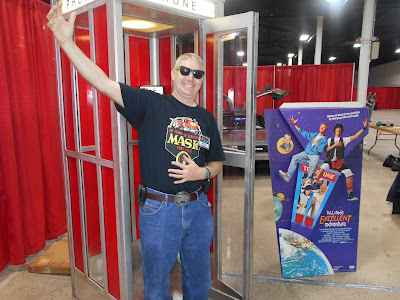 Then, the loop began where our fond childhood memories lit up our minds. So much to see and buy, we both had to check the other to keep us from robbing a bank. Tonka trucks, framed-backlit arcade game panels, artists, video game systems and cartridges, Transformers, Go-Bots, M.A.S.K., keychains, board games, and a G.I. Joe flagship which took my breath away from its sheer size!  It had to be six feet long and about two to three feet wide.

The enormous amount of items was so much to take in that we had to stop less than halfway in to get ready for the M.A.S.K. panel. Taking our seats in the red draped conference area, we watched the tail end of a "children of the '80s" panel. As the minutes quickly approached, we began to wonder if one of us should go get Doug or if the RetroCon staff was going to remind him. Our questions were answered when Doug wondered in and sat right next to Bill Faries at the table. Bill and I handed our phone and video camera, respectively, off to his wife and cousin to capture the panel which you can watch here. We prepared ourselves, me with a folder of notes with questions and M.A.S.K. facts that we three had prepared in advance. Jason quickly placed our flyers and goodies which included some cards from Boulder-Hill.net to be given away at the end of the panel. 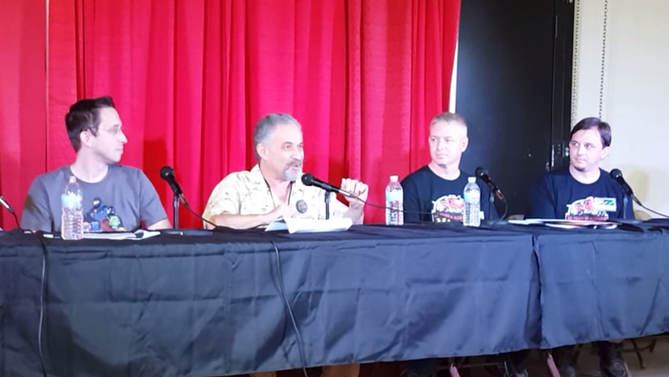 To be honest, I did not know who would introduce us, but Jason was nervously up to the task. He professionally provided an introduction for the guest of honor, Doug Stone, and a quick intro and synopsis of Matt-Trakker.com and our AgentsofMASK.com website. Doug was gracious to share details about his career, many of his voices, favorite moments, and even what some of his recording sessions were like. He shared about his "loop group" which provided all the background voices and effects for the '90s shows Xena: The Warrior Princess and Hercules. He also spoke about the life outside of the recording booth which includes a zeal for hockey (born in Canada) and a local pet rescue where he volunteers his time. Finally, we turned it over to the fans who had some great questions. Our time ended with Doug voicing Matt Trakker where he gave a good "assemble the team" line which included "T-Bob, you're staying at home." 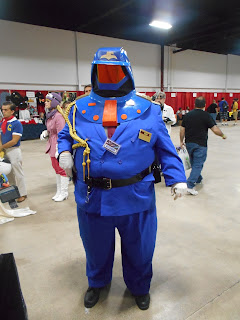 Afterwards, we briefly discussed how the panel went with Bill and his family. As we parted ways, Jason and I sat in on the next panel which was a trivia giveaway. After a few great items were seized, I left to go back to visit with Doug. As I walked out, I saw a Miles Mayhem cosplay. Elated, I ran back in to narrowly miss a Voltron question and prize. I passed the word to Jason who was excited about seeing Miles.

I went back out and checked on Doug to see if he needed lunch, a drink, etc. and said he was well taken care of by the Retro Con staff. We chatted for a while about everyday things, some politics, my life in the military, his life out in L.A., the cost of housing there, how he was coming upon retirement, and everyday things. I was very intrigued with how approachable he is and how blessed he feels about the love from the fans.

He began to have other fans show up so we parted again as Jason finally broke away from the trivia with a couple prizes in hand. We quickly went over to capture photos of Miles Mayhem and then decided to break for lunch. Upon our return, we saw the original Ecto-1 and took some snapshots. Entering back into hall, we walked the floor looking over all of the great items, making a few purchases and snapping pics of the cosplayers.

As the end of the event neared, we went back through one more time to visit with the voice actors.  We chatted again with Doug about how the event was going and he was very open to doing another con in the future. In fact as we approached, Doug asked us if we came across anything good. We ran down our haul with Jason showing his finds. He then mentioned that he would like to walk the vendors to see if he could find the V.E.N.O.M. characters he voiced. He stated he had the M.A.S.K. figures, but not the others. I told him where to look and as a few more fans appeared, we went to visit with the other actors.

We walked over to chat and get a picture with Michael Bell who I best remember as Lance from Voltron and Duke from G.I. Joe; A Real American Hero. It was a quick chat but he was very welcoming to talk about his experiences. Then, we went on to John Moschitta, Jr known best as the Micro Machines Man and Blurr from the original Transformers. Another great chat led to him telling us about being fired from his Micro Machines venture on a Christmas Eve, yet was still proud to interact with the fans. 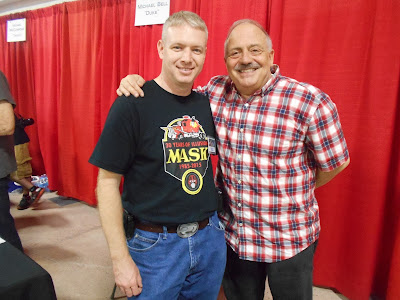 Finally, we met Larry Kenney who voiced Lion-O and Jackalman on Thundercats along with Blue Grass from SilverHawks and cereal mascots like the Cocoa Puffs bird and Count Chocula. I really wished I had brought something for them to sign but getting a photo and chatting with them was just as spectacular; especially with Larry as I was wearing my Thundercats belt buckle. 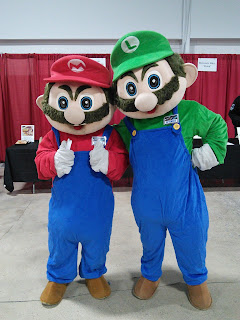 Before we left I decided to grab Jason to help locate the V.E.N.O.M. figures for Doug. Low and behold, we found Boris Bushkin and Nash Gorey and bought them. Returning to the table, I handed them to Doug and as he reached for his wallet, I said this was simply a gift for him coming to RetroCon and meeting us fans. Being very gracious and thankful, we shook hands and said our good-byes before trekking one last time through the vendor tables.

Our drive home was filled with the euphoric and almost childlike excitement from nearly seven hours of rediscovering our youth and meeting some of our favorite voice actors. We didn't waste much time wanting to share the experience with our fellow M.A.S.K. agents so we recorded a podcast (which you can watch on YouTube or download on one of our feeds) and posted the following day.

To conclude our trip down '80s lane, we closed the day out by dusting off my NES and playing several games past the midnight hour including Super Mario Bros. 3, Arch Rivals, and The Three Stooges that I scored at the venue. Such an awesome weekend! A final thank you to all of our M.A.S.K. and Rediscover the 80s fans as well as Doug Stone and the voice actors for making this an awesome weekend!

For a video walk through of the vendor tables, check out this video posted by Mike Ruthless.
Look for more Retro Con 2015 posts right here on Rediscover the '80s!
Newer
Older