If '80s Cartoons Had Their Own Pro Basketball League

Basketball has always been my favorite sport and I immediately fell in love with this recent Vanila BCN mashup project. If you take NBA logos and combine them with classic cartoon shows, you get a totally rad pop culture basketball league.

Care Bears, Masters of the Universe, Snorks, G.I. Joe, and many more animated TV shows that we remember from Saturday mornings come to life with their host city in these logos. I have a few nitpicks, but most of them I thought were very well incorporated with the NBA logo choices. Let's take a look and I'll give a little insight for those of you who are not basketball fans. 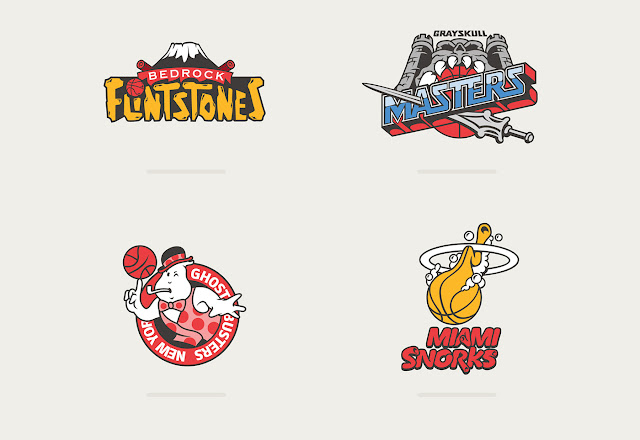 In this first set of four, the Bedrock Flintstones is probably my favorite which is a play on the Denver Nuggets logo and it's Rocky Mountains background. I don't believe Grayskull Masters is based on a current NBA logo but that wouldn't stop me from proudly displaying it on a t-shirt. The New York Ghostbusters is fun, but based on the classic Boston Celtics logo. I guess it might be a backhanded reference to the new Ghostbusters movie being filmed in Boston. The Miami Snorks is also a very fun logo. 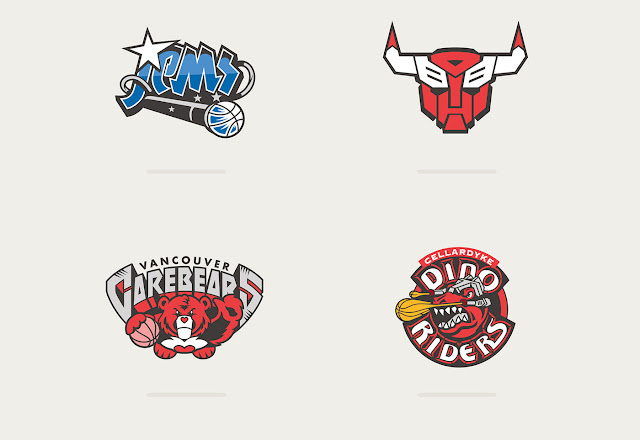 In this set, the Jems logo is based on the Orlando Magic logo. I'm not sure if the cartoon was based in a particular city, but would've like to see something like the Starlight Jems. The Transformers logo is based on the Chicago Bulls logo. The Bulls logo is pretty iconic even without the city/team added so I have less of a problem with it not having something like the "Cybertron Autobots." The last two are my favorites in this group. The Vancouver Care Bears is a great rendition of the now Memphis Grizzlies logo. The Cellardyke Dino Riders is based on the Toronto Raptors logo and is brilliant! 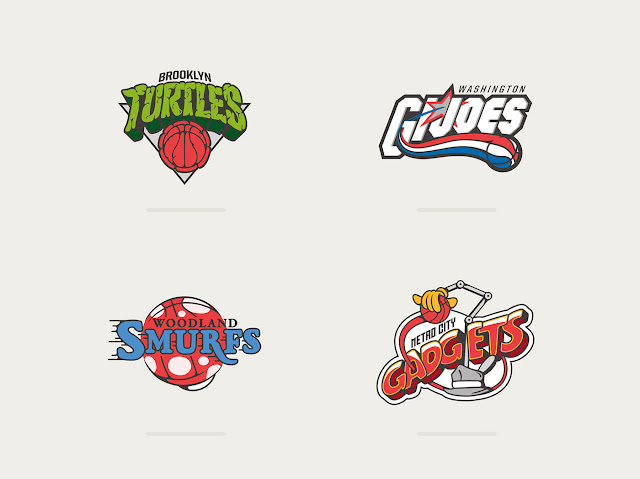 The final set is really good beginning with the Brooklyn Turtles which is actually play on the New York Knicks logo. I was surprised the didn't go with the Brooklyn Nets logo for this one. I don't think the Washington Joes is based on any of the Washing Wizards/Bullets logos, but it's still really fun. The Woodland Smurfs is based on my favorite team the Los Angeles Lakers logo and love the mushroom top as the basketball! The Metro City Gadgets uses an old Seattle Supersonics logo and is very imaginative.

So what was your favorite? A couple of suggestions I'd have for more logos would be the "Third Earth Thundercats" that could work well with the old Charlotte Bobcats logo. How about the "Silverhawks" with the Atlanta Hawks logo? Maybe My Little Pony with the Dallas Mavericks logo?