Lion Forge Comics continues to bring back '80s properties into vibrant new life. The latest series to join their library which currently features Knight Rider, Airwolf, Miami Vice, and Punky Brewster (to name a few) is the space western Saber Rider and the Star Sheriffs. For those who might need a refresher, Saber Rider was a first-run syndication animated series produced by World Events Productions who also gave us Voltron and Denver the Last Dinosaur.

The original release ran for 52 episodes from 1987-88. With merchandise being primarily released in Japan, the Saber Rider franchise has been primarly dormant for many years. Although, the complete animated series has been released to DVD and a new video game was backed through Kickstarter with the release expected in 2016. And now, Lion Forge Comics gives its own spin on the franchise with a new 4-issue series to be released in 2016. 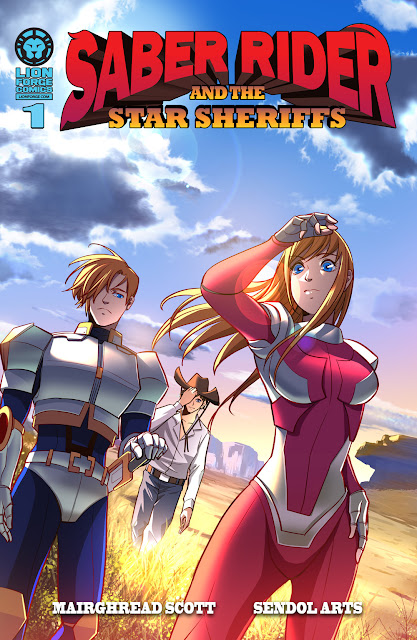 The Star Sheriffs are back -- and this time, the greatest threat to the galaxy lies in their own ranks!
In the distant future, at the far reaches of the new frontier, the safety of the galaxy falls to the Star Sheriffs -- an elite law enforcement agency protecting human colonies from alien marauders. When a mysterious group known only as the Outriders begins attacking planets with highly advanced technology, a legendary marksman named Saber Rider steps up to stop this terrible new enemy. But when an Outrider sympathizer is revealed in the Star Sheriffs' midst, Saber Rider realizes that he can’t complete this mission alone. The classic ‘80s animated series is back in this wild western/sci-fi mashup!

The first book makes it debut today and I got a chance to preview a copy. To be honest, I don't remember much about the original series so unfortunately I can't give much of a comparison. I can, however, report on the story and look of this space western adventure from a person who has enjoyed watching the Firefly TV series and is an avid fan of Voltron. 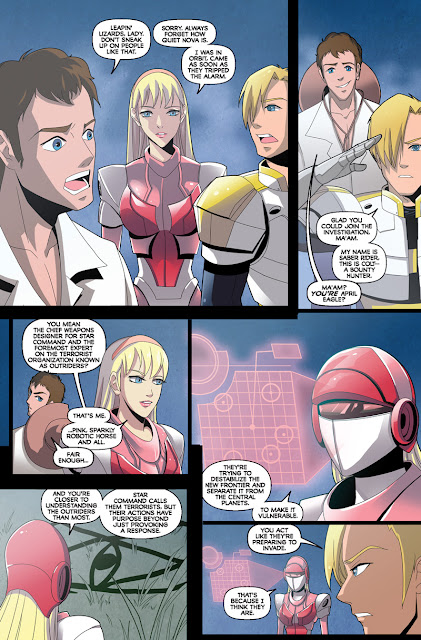 The first issue was very enjoyable. I liked the drawing style which is a nice mix of modern and the traditional anime in the cartoon. Saber Rider responds to a train heist while having to deal with a rogue bounty hunter in his path. Flashbacks throughout the story help us to understand the current galactical situation with the mysterious dimension-jumping Outriders. There is a great confrontation with Jesse Blue, a former cadet that has since gone his own way. April Eagle is also introduced with a strong presence in Calvary Command, committed to rectifying the current dangerous situation of a bomb detonation all the while trying to make up for what seem to be some past mistakes. 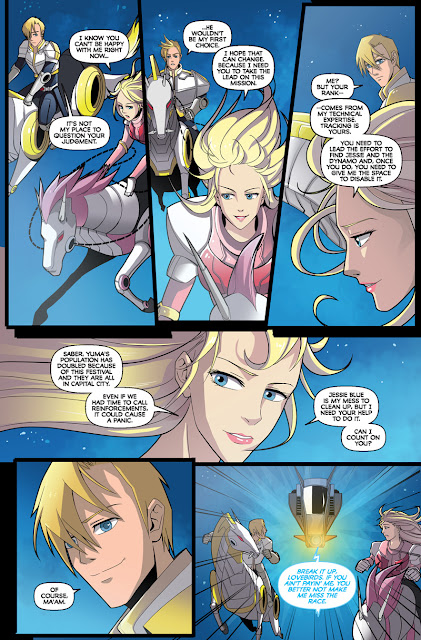 The stage is set nicely for the 2nd issue when the trio realizes the Jess Blue and the Outriders might have some bigger plans than train robberies. A glimpse at those plans will leave you wanting more!

Download the first issue now from Amazon or Comixology. Subsequent issues to be released in April, May, and June 2016.

ABOUT THE CREATORS
Mairghread Scott is a writer for television and comics, including work on Transformers Prime and G.I. Joe Renegades. She helped to create the first fan-built transformer, Windblade, and brought her to life in the IDW comics series of the same name as well as in the new animated series Transformers: Robots in Disguise. Her first original comic series, Toil and Trouble with artists Kelly and Nichole Matthews, was published in 2015.