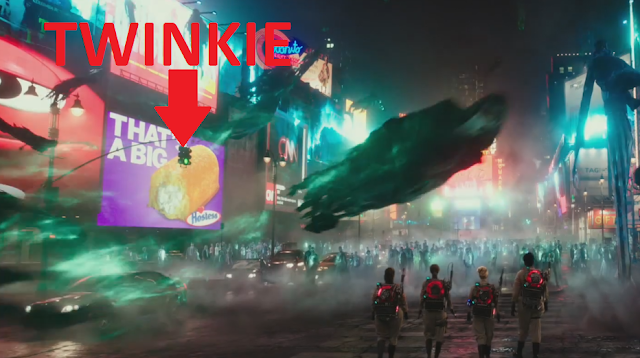 The first trailer for the new Ghostbusters film directed by Paul Feig is here! I've been dying to see some footage for over a year and March 3rd has been circled on my calendar for two weeks now since its announcement. First, check it out and then I'll post some details and callbacks that I've noticed...

If you've been following this website, you know I've done a 180 on this movie since I first heard it was being made. Ghostbusters is a property near-and-dear to me after growing up with it in the '80s. I, like many others, usually approach these reboots, remakes, and long-anticipated sequels with caution. Can I watch it without totally judging it against the great memories I have? Or should I just stay away?

This new 'Ghostbusters' movie has pretty much checked off everything on my list that SHOULD be in the movie. The fresh look of the jumpsuits, proton packs, and the Ecto-1 vehicle combined with the gender role reversals I think give it a modern update while still keeping all the essential elements. Plus, the cameo roles, callbacks, and the fact that we'll be drinking Ecto Cooler this summer have me to the point of asking myself "what more could I possibly want??"

The new trailer gave a few more callbacks to the original films as well as a few more details about the movie iteself:

Hello, Slimer!! A few sites reported last week that Michael Kenneth Williams bragged about having some scenes with the hot dog eating apparicion. Apparently it was true since we catch a glimpse of Slimer in the new trailer. It also appears that he might still be eating hot dogs!

The new trailer also gives a Twinkie callback when the new crew walks through Times Square. A billboard for Hostess gives us the famous "That's a big Twinkie" line. 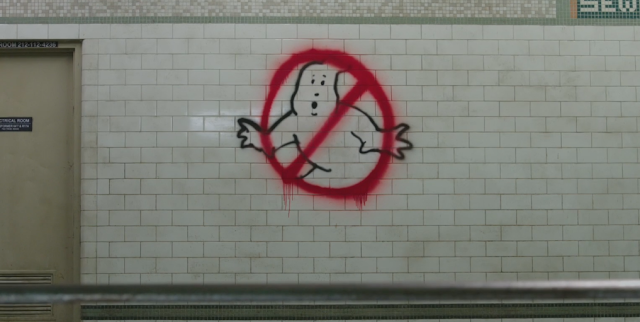 The new trailer mentions the old team from 30 years ago and includes a shot of the old firehouse along with this graffitti of the original logo. To me, the statement "A new team will answer the call" alludes to the same universe as the previous films. Will this movie continue the story? Could the cameos roles actually by reprises of the original characters?

Dr. Erin Gilbert (Kristen Wiig) drops a little knowledge during the trailer about where the ghosts are coming from. She says "someone has created a device that amplifies paranormal activity and we might be the only ones who can stop it." Sounds like the main bad guy is a human controlling the ghosts. Could he be linked back to the original storyline?

The first ghostly encounter in the new trailer appears to be in a library. They also mention that she appears to be peaceful before unexpectedly sliming Dr. Glibert. Hmm, this sounds familiar. 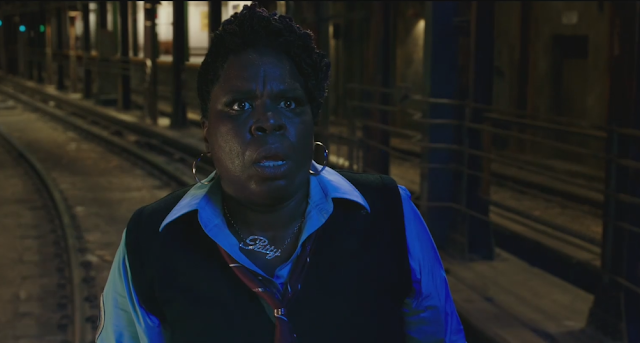 Patty Tolan (Leslie Jones) is shown working for the subway and has a ghostly experience that appears to be on subway tracks. Of course, this harkens back to Winston's subway encounter in Ghostbusters II.

The new HQ seems to be above a local chinese restaurant. This is also where the scene at the end of the trailer where a ghost enters Abby Yates (Melissa McCarthy) takes place.

Is this helmet a callback to the one Egon gives Lewis Tully in the original movie?

Tell me your impressions of the trailer and reactions to what I pulled out. Bring on the next trailer!