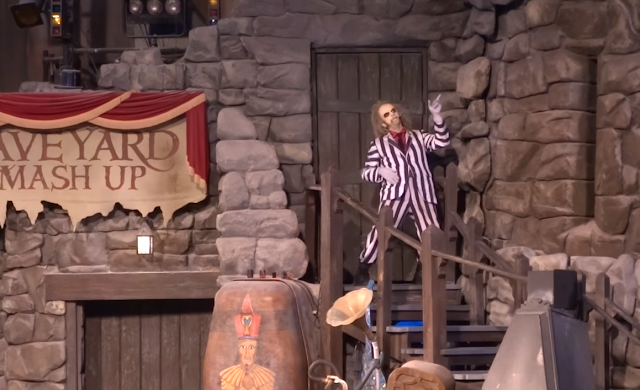 Fans of Beetlejuice received some good news today as Showbiz Spy reported that Tim Burton officially confirmed a sequel is in the works with Michael Keaton and Winona Ryder. This is the first time a legitimate backing story has surfaced since Ryder told Seth Myers about the sequel last September.

It's been a tough year for fans as Universal Studios Florida closed the long-running live stage show "Beetlejuice's Rock and Roll Graveyard Revue" on Jan 5, 2016. The show began in 1992 in both the Florida and Hollywood parks and actually continues at Universal Studios Japan. But here in the states, the show's closing made way for "Spiderman Rocks" at the Hollywood park in 1999 and now "Fast and Furious: Supercharged" which set to open at the Florida park later this year. Several fans have expressed their disappointment through online petitions, but perhaps this new movie could resurrect the show in the future.

Although music set lists changed over the years, the show's concept remained primarily the same with the classic Universal movie monsters performing hit songs and Beetlejuice serving as host. The final version titled "Beetlejuice's Graveyard Mash Up" primarily featured '80s hits from Prince, Cyndi Lauper, The Bangles, The Romantics, Guns N' Roses, Michael Jackson, and many more. Though you can't watch it live anymore, thankfully the final performance (along with earlier versions) have been preserved on YouTube! Watch it below and leave your comments on Beetlejuice 2!