A new USA Today story gives us a first look and new details about the upcoming Netflix series Voltron: Legendary Defender. Produced by DreamWorks Animation, the new series based on the 1984-85 Voltron anime cartoon imported from Japan will receive an initial run of 13 episodes, 22-minutes in length. Fans will get a first glimpse tomorrow at WonderCon in Anaheim, CA.

Details included in the article sounds like the new series will be geared toward satisfying lifelong fans and providing new aspects to the existing canon:

Legendary Defender centers on five Earth teenagers — Keith, Lance, Hunk, Pidge and Shiro — who are thrown into the middle of an intergalactic battle and become the last line of defense for Arus and other planets against an evil alien force led by King Zarkon.
Whereas most of the original characters were nondescript space explorers, the main players in the new series will have backstories, and “a real purpose for being on this mission and getting involved with Voltron in the first place,” says Joaquim Dos Santos (Executive producer.) 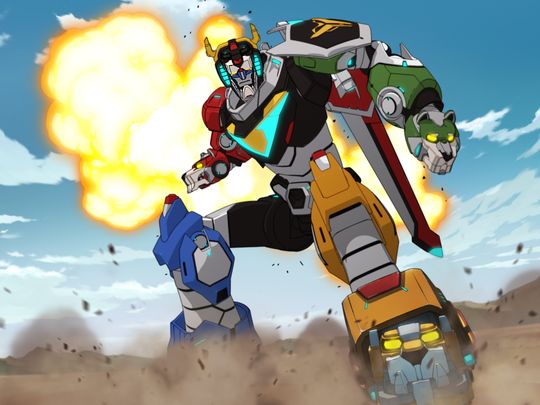 Fans should also rejoice that producers are really trying to cater this new series to an adult audience, even going as far as describing as a Game of Thrones feel with epic battles:


So when the good guys encounter a vicious Robeast, “you actually feel like, ‘Oh man, is Voltron going to get out of this one?’ ” Dos Santos says. “There are some of those encounters they just manage to survive.” Co-executive producer Lauren Montgomery: “Not everything is solved by Voltron alone. Sometimes they need to beat something just as the lions. Sometimes they just do it as themselves fighting as men.”

I'm really excited as it seems Voltron is in good hands. What do you think?