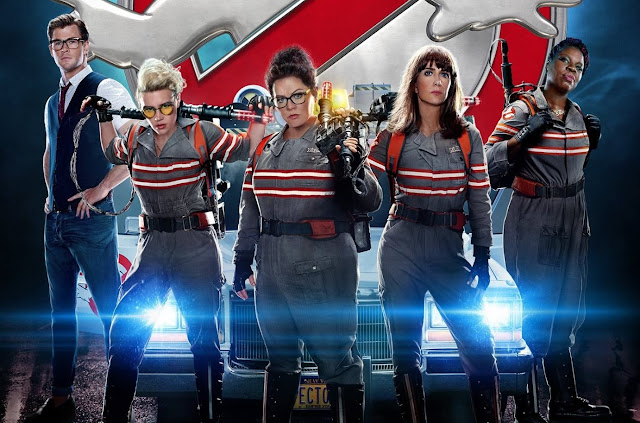 It's opening day nationwide in the US for the new Ghostbusters movie and we've got TWO spoiler free reviews to share with you before heading out to the theater. I had a change of plans for the weekend and decided to watch the movie in IMAX on Thursday night. Upon hearing this, my good buddy Wyatt decided to join in the fun by also going to see the movie at his local theater. So here we are, two children of the '80s, ready to give you our thoughts on the first Ghostbusters movie in 27 years.

This is actually a very impressive movie. I came into the theater with pen and notebook in hand to ensure I captured great reviews. Odd? Perhaps, but the notes were key to this review and to ensure I gave it a fair critique. Initially, I thought that I'd be watching this with my "original Ghostbusters" blinders on and, although I caught myself making some minor comparisons, I was thoroughly stoked about this movie upon completion.

Obviously, the effects have improved immensely from the days of near cartoon-like, hand drawn proton pack streams yet the accuracy of those streams impressed this 40 year old's eye. The streams were also awesome as they had more control of the ghosts rather than simply grappling them. Not to mention, the added weapons to the arsenal for busting ghosts with an absolutely cool scene with Jillian Holtzman (Kate McKinnon) where it seemed like a salute to the Matrix.

As for comparisons and catching the "rediscover" moments portion of my review, the new Hurst Ecto-1 seemed quite appropriate although I couldn't help not comparing it to the original with the very odd but welcoming siren. The origins of the team was a great nod to the original GB with awesome lines like "no self-respecting scientist" was a nice touch. In addition, the being kicked out of the college scene was also a great reach back to the original. Also, I noticed a nice wink to GBII with the painting which reminded me of Vigo. I initially tried to see which female character represented the original such as Abby Yates (Melissa McCarthy) seemed more like Egon while Jillian Holtzman was like Ray, however that analysis faded as the movie progressed; they were truly unique characters. The PKE was actually impressive although the twirling neon antenna were a bit too much for my taste. The subway scene seemed like a very minor, but nice nod to the GBII movie.

The proton packs were awesome with the graphics and the original sound effects. In fact, I was more impressed that the actresses and the sound effects seemed to have a better punch than the previous GB. The ghost trap was nice as well, however it seemed bulky in comparison to the more compact, rectangular trap from the original. I also saw a boombox in the lab, nice touch for we 80s fans. I was mildly disappointed when the ladies were introduced to the firehouse, then they turned it down and started out at the Chinese restaurant. However as the movie progressed, it did help start their endeavor being that they were able to acquire the firehouse at the end.

In conclusion, Ghostbusters 2016 has plenty of action, thriller-like spooks, and good but not great comedy throughout the movie which kept my attention. The ghosts and the graphics were terrific, hands down. In all, a very impressive movie with a great, updated Ghostbusters theme. 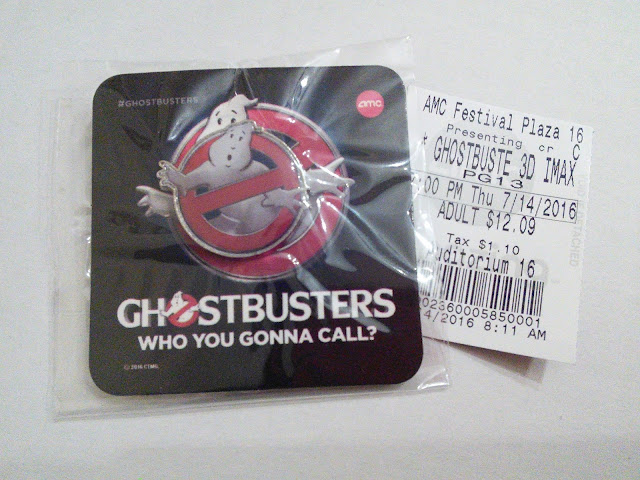 Before I start, I wanted to express my attitude going into the theater. I didn't know what to think when I first heard they were making this film. It was the first I remember watching in the theater as a kid and even took the time to watch the re-release last month in the theater. Slowly and steadily over the past year or so, I was won over mainly because the film seemed check mark everything I wanted to see in the new film. This week when I rewatched the two original movies and even a handful of The Real Ghostbusters episodes, I never had the expectation it would surpass any of those. I also didn't have any expectations for the actresses either as I have only seen a handful of Mike & Molly episodes and don't watch many SNL skits. Leading up to the release though I was very grateful it had been made for all the new merchandise (including the classic franchise) and of course, the re-release of Ecto Cooler. So my attitude going in was to take it all in and have fun. I did (and not just because AMC bribed me with a collectible pin in addition to my ticket.)

Easily my favorite aspect about the new film is the special effects. I was very glad I saw it in IMAX and even the end credits were fun to watch. The couple "scary" scenes in the beginning were genuinely frightening with the effects and the IMAX sound really enhanced the jump scares. The equipment "upgrades" were also pretty cool although the Jillian Holtzman character (easily my favorite of the group) must have been working 24/7 to create everything. The cameo roles of the original cast were fun and I clapped for most of them. Slimer even had more screen time than I expected and found out why the new Ecto-1 toy has him behind the wheel. I liked the villain Rowan North (Neil Casey) and thought having essentially a human as their adversary was a different twist.

My least favorite aspect of the film is I felt the one big question I had going in was never answered definitively...is this a reboot of the franchise or just a remake of the original film? The film definitely has elements of both, probably more towards a reboot but it also followed the traditional Ghostbusters plot and structure pretty closely and had character similarities throughout. And probably what confused me most about what this movie was supposed to be was the post credits scene. I also expected to laugh more. I had a few LOLs but not as many as I had wanted. I probably laughed at Kevin (Chris Hemsworth) the most mainly because I was surprised at the insane level they used to dumb down his character. The mayor (Andy Garcia) and his assistant (Ceciliy Strong) were probably my least favorite characters.

Tell us if you'll be seeing it this weekend and how you plan to approach it in the comments below.

[UPDATE: Also check out our Roundtable Review of Ghosbusters on the Recurrent Events podcast!]