Album of the Week: 'Escape' by Journey 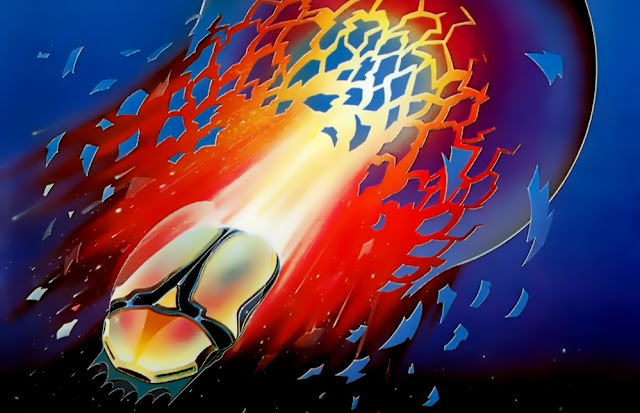 35 years ago this week, the American rock band Journey released their seventh and most successful studio album. Escape was the first album featuring current keyboardist Jonathan Cain and was co-produced by Kevin Olson and Mike Stone which engineered several albums for the band. Escape has been certified platinum (one million units sold) nine times by the RIAA which is second only to their Greatest Hits album (15x platinum.)

Escape produced four hits singles and remains as Journey's only album to reach the #1 spot on the Billboard album chart. The first single "Who's Crying Now" made it to #4 on both the US pop and rock charts. "Don't Stop Believing" followed with another trip into the Top Ten on both charts. "Stone in Love" never became a pop hit, but peaked at #13 on the US rock chart. "Open Arms" followed with the band's highest charting pop single to date, peaking at #2 for six straight weeks behind J. Geils Band and Joan Jett &the Blackhearts. The final single "Still They Ride" cracked the Top 20. The album also spawned an Atari 2600 video game titled Journey Escape in which, according to the manual, had players "guide each Journey band member past hordes of love-crazed groupies, sneaky photographers, and shifty-eyed promoters to the safety of the Journey Escape vehicle in time to make the next concert."

Journey is yet another '80s band which fell victim to my Greatest Hits collection in the Columbia House/BMG era. Although I've heard and sang along with all the singles from the album, it wasn't until I actually purchased the record album in the past few years that I've listened to all the tracks. I was pleasantly surprised to hear some great upbeat rock tracks like the title track, "Dead or Alive", and "Lay It Down."

Rediscover Escape this week via YouTube below or subscribers can listen to the full album for free on Amazon Prime music. You can also join me by posting your favorite tracks or memories in the comments.