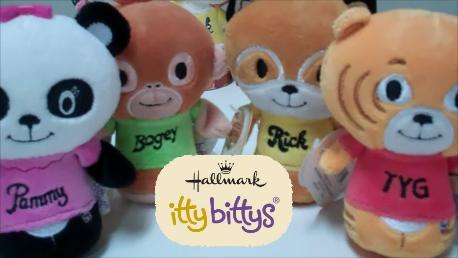 I had the privilege of being contacted recently by a Hallmark rep and asked if I wanted to review the new Shirt Tales itty bittys figures. Yes!!! Although the Hanna-Barbera cartoon was short-lived, I have pretty fond memories of watching Shirt Tales on Saturday mornings. The TV series was created from a line of Hallmark cards that featured animals wearing t-shirts with special messages.


Hallmark's Itty Bittys have been around for a few years and are a great addition to any figure collection. They are about the size of popular vinyl figures like Funko's POPs but are part plush and beanie. The beans are just in the bottom section and allow the figures to stand up. They include some great detail and come in a wide variety of characters from superheroes, movies, and you can even create-your-own!

The four Shirt tales characters were an online exclusive that went on sale July 18. In just a matter of days, they sold out. Amazing! Hard to believe an obscure 1982 cartoon had that much interest! So if your were able to snag a set of these limited edition figures, consider yourself lucky because you won't find them in stores. I'm not sure if Hallmark plans to produce more, but if they do, you'll be the first to know! If you have a Hallmark account online, I encourage you to add the Shirt Tales Itty Bittys to your favorites in case they do release more.

Check out my review of Pammy, Bogey, Rick, and Tyg below including a fun look at some hand-painted Shirt Tales figures that I've managed to hang on to since childhood!