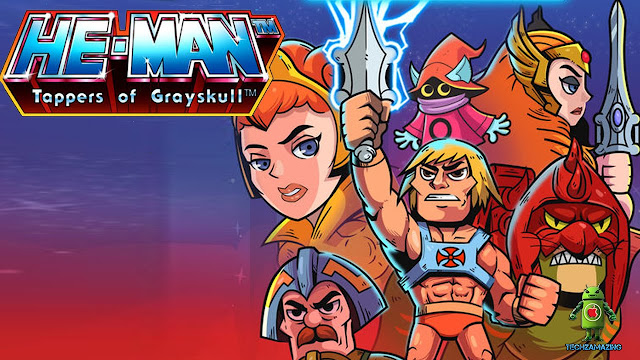 He-man and your favorite Masters of the Universe are back in a new tapping RPG adventure game called He-man: Tappers of Grayskull. Produced by Animoca Brands, the new mobile contains some familiar voices like Alan Oppenheimer, the original Skeletor in He-Man and the Masters of the Universe TV series and Cam Clarke who voiced He-man/Prince Adam in the 2002 series. Join all of your favorite characters in a battle of massive evil proportions! Watch the trailer...


"Darkness looms over Eternia. The evil Skeletor has unearthed an ancient sorcerous stone that allows him to turn anyone, including himself, into giants. Using vile magicks, Skeletor enlarged each and every member of his nefarious force to GARGANTUAN proportions. It's up to you, He-Man, to put a stop to this unspeakable evil!" Here are the official features" 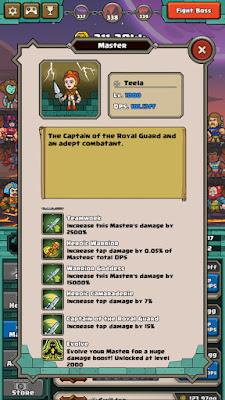 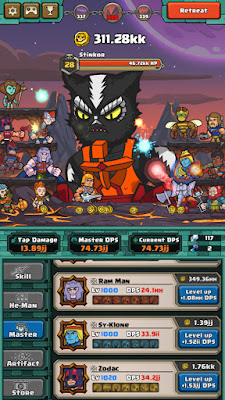 REVIEW: A fun story precedes the battle, but this game wastes no time getting you right into the heat of the action. With very little instruction (which quite frankly is not necessary,) the tapping begins with attacking your first enemy. Each level has 10 opponents with a boss battle that takes a little more preparation. That preparation comes with earning gold and leveling up He-man and unlocking other masters. The more characters fighting, the more damage is done and the quicker you level up. Should you fail in defeating a boss, no worries as you can simply keep attacking the enemies until you earn enough gold to upgrade your team and face your nemesis again. Orko appears offering artifacts to help as well as special skills which includes summoning Battlecat.

He-man: Tappers of Grayskull is mindless fun injected with a colorful shot of nostalgia. It's not a game style I'm really used to playing. I did however managed to reach level 50 in about the first hour of playing, but man, are my fingers sore!! The character design and backdrops are really great and when you decide to quit, you team continues fighting and you collect the gold when you return! The upgrade costs are getting astronomical but it seems the amount of gold earned increases at about the same level. Check it out and come back with your own review in the comments! Play for free now with in-app purchases on iTunes and Google Play.

Do you have the tapping power?! Read more Game Reviews on RD80s
Newer
Older