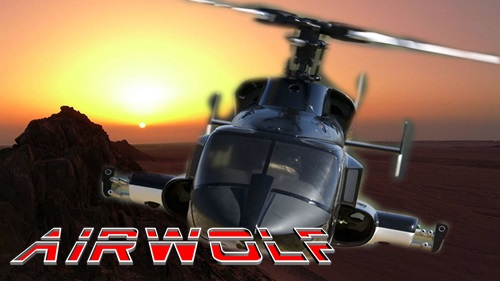 There are many reasons to love the 1984 television series Airwolf, but the lavish stunts and aerial scenery wouldn't have been nearly the same without Sylvester Levay's musical score and theme. As I've rediscovered episodes over the past couple years on Netflix, I seem to keep pressing play for one ultimate reason...to hear that wonderful synthesized theme.

Airwolf fans know that it wasn't until the second season when the theme and score transitioned primarily into its iconic synthesized sound. And when you heard the theme in the middle of an episode, you knew the battle was on. Just the like synthesized soundtrack of Knight Rider, the music really set the tone for the missions of this flying super vehicle.

I primarily listen to synthwave music now and after a recent search on SoundCloud, I was astounded at the insane amount of Airwolf theme covers that are posted on the music site. With the powerful and distinct sound, it should not be surprising that synth artists would want to cover a great track. But a 30-year television old theme??

It's true. I easily listened to 50 covers and remixes of the howling helicopter theme in my SoundCloud search. I managed to narrow down the 8 tracks I thought were the best and present to you the playlist below. You can't seem to get enough synthesizer into this theme (even with a fantastic metal version I found) so be prepared for two Hellfire missiles in your earholes...