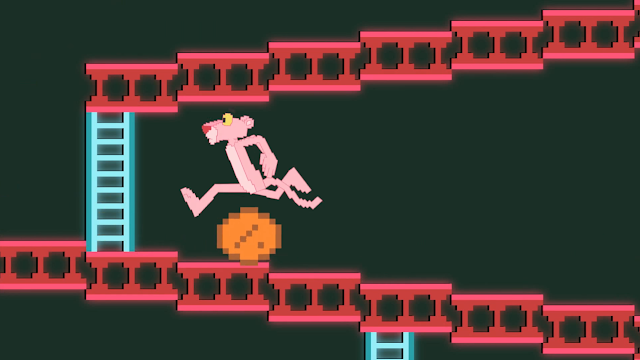 One of my all-time favorite cartoon characters is the Pink Panther. I remember watching the classic animated shorts religiously as a kid and even remember filling up a 6-hour VHS tape in the early '90s when it ran on the TNT network. A few years ago, I purchased the first few volumes of the classic cartoon on DVD and it quickly became a household favorite among my kids.

After scrolling through YouTube, I stumbled onto the official Pink Panther channel and began watching Pink Panther and Pals episodes which originally aired on Cartoon Network in 2010. I had never watched this series, but quickly found out this updated version still embodies the spirit of the classic show.

My favorite episode so far is called "Pinxillated" in which the Pink Panther goes to a vintage-style arcade that is run by The Little Man (now called Big Nose) and helps kids win tickets to redeem for prizes. During the antics, they both get zapped inside several arcade machines including versions of Pac-man, Donkey Kong, and Street Fighter! I thought it was very fun and wanted to pass it along.

Watch the full short below and connect with the channel for more from Pink Panther and Pals and also 127 classic shorts!