My 7 Favorite Moments From The G.I. Joe Season 1 Intro 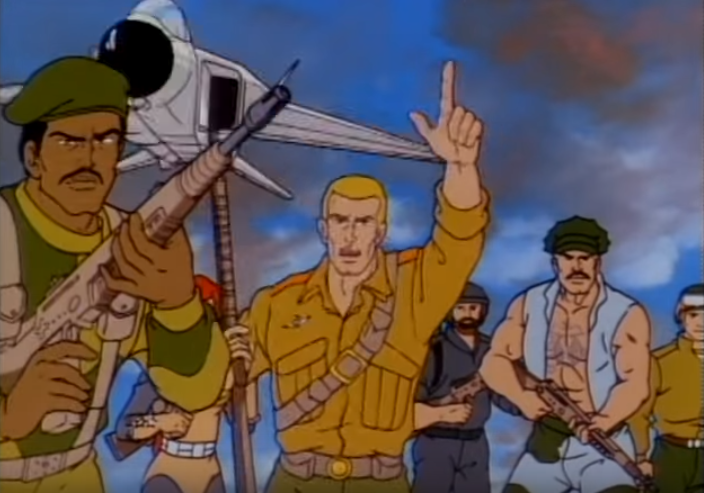 I'm once again watching the G.I. Joe: A Real American Hero series, mainly from my own initiative but occasionally now from my 3-year old daughter. She mainly wants to watch it for the "Gee-Gigh-Joe" theme song which she will sing along to as the intro animation plays. I'm about halfway through the 95 episodes binge and for the first time, also watched the special features on my Shout! Factory DVD set.

I've gone back and watched several '80s animated shows over the last couple years like M.A.S.K., Thundercats, He-Man & the Masters of the Universe, Challenge of the Superfriends, Smurfs and Spider-man & His Amazing Friends. I've even sought out some more obscure shows that are available on YouTube like Pole Position. After receiving a heavy dose of animation in recent years, I'd like to think my eyes have been trained now to catch unique elements from each show.

The G.I. Joe: A Real American Hero animation team really packed a great amount into the intros for the 1983 mini-series, The Revenge of Cobra 1984 mini-series, and the Season 1 & Season 2 regular series intros. Hasbro and Sunbow/Marvel seemed to work in all the great characters created by Larry Hama even for just a split second.

What my eyes have mainly latched onto in the Season 1 intro (thanks to the recent binge) are the very quick closeups as the animation progresses. In case you don't have it memorized like me, watch again below and look for quick closeups like Zartan in a Trouble Bubble and the battered faces of the crimson twins after being punched out by Snake Eyes and Quick Kick.

With these subliminal closeups are fresh on my mind (and yours), I thought I'd pull some of my favorite still moments out of the opening sequence and share. While doing this, I've already found one detail that I've never noticed before. Maybe you will notice some too!

I've had some success putting together panoramas from M.A.S.K. that I knew this moment was one I really wanted to capture. From the outstretched arm of Flint, the Joe team springs into action from the HQ command center in a real quick sweeping shot. I started the GIJoeIsThere Tumblr blog mainly to share stills like this so connect if you want to see more and other art through the years. 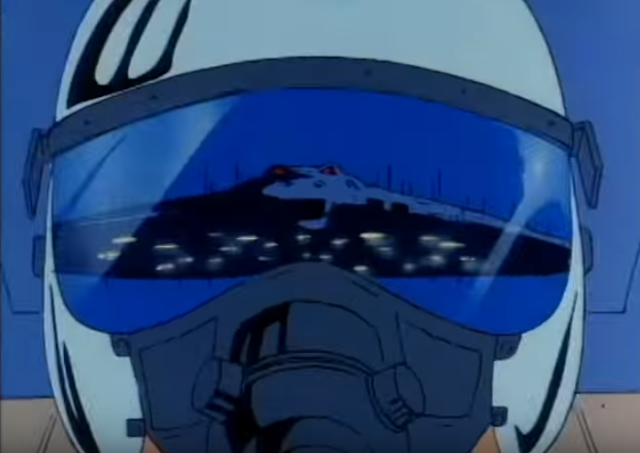 Ace is probably my second favorite Joe behind Low Light. I love this still of the large Cobra ship reflecting in his visor from the Skystriker cockpit. There is also another great shot of him a few seconds later targeting the ship. 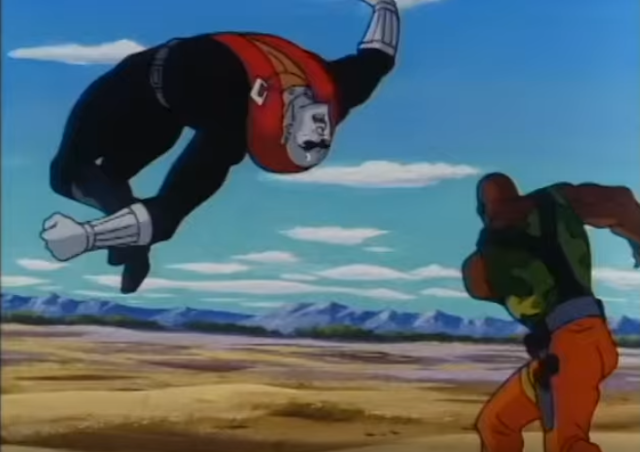 There are many great feats in these intros (especially in G.I. Joe: The Movie) which includes Destro being tossed around like a Cabbage Patch Kid. After Alpine swings Bazooka up to Destro's gun perch on the large ship, he is thrown off and caught by Footloose who then tosses him to Roadblock. This moment is just after Roadblock's pitch of Destro which bowls over the Dreadnoks. 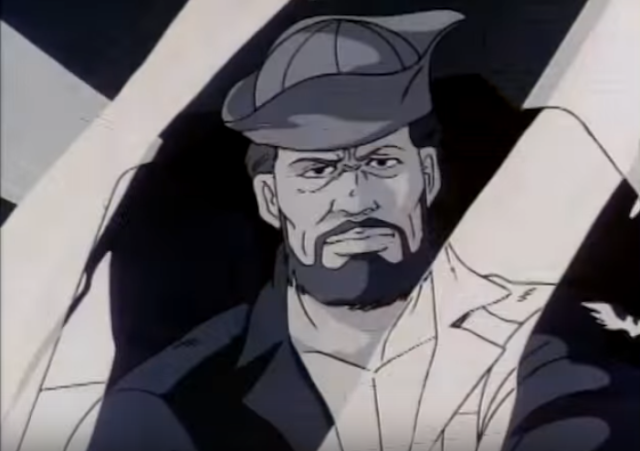 We get two quick closeups of Shipwreck from inside the S.H.A.R.C. as he is trying to escape from the Cobra Rattler. I always thought it was a bit odd to see him instead of Deep Six but I guess it could have been a testament to his character's popularity. 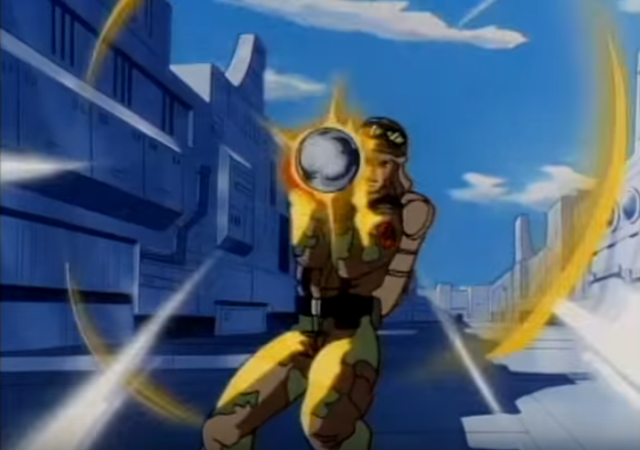 Continuing the sequence with Shipwreck, we see him lead the Rattler right to Dusty who awaits with a rocket launcher. What I hadn't noticed before (until trying to capture this moment) is the Rattler pilot Wild Weasel ejects right before Dusty fires. It happens so quick that you either need to be watching for it or try to pause the video. 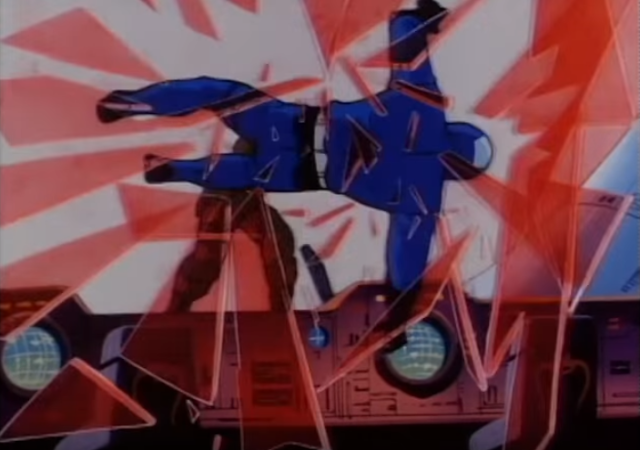 Two great moments with Cobra Commander, the first being the shot above when Flint throws him through the eye of the Cobra ship and glass shatters everywhere. The end of this sequence is also good when CC's helmet symbolically smashes the globe. 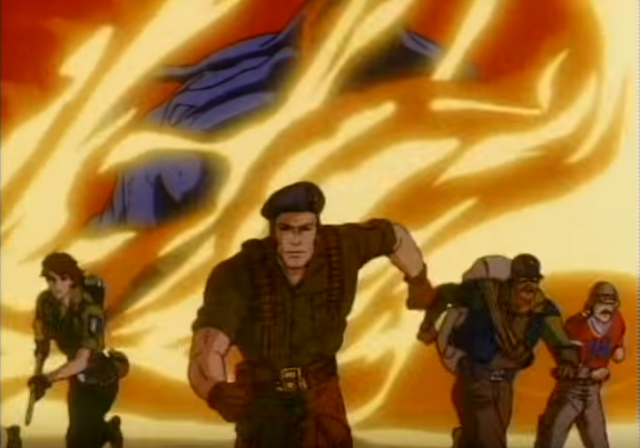 This might be the best part of the intro when the Cobra ship crashes to the ground and five Joes emerge from the flames running straight toward the screen. Flint has this focused look on his face as if to say "just another day against Cobra" which gradually ends a closeup. The moment could probably be classified as a trope from TV and film where it appears the hero is dead and somehow emerges alive from hopeless circumstances. Although in this instance, there isn't a scratch on any of the characters and they are sprinting!

Did I miss one of your favorite moments? Leave a comment below and tell me about it. I really love examining these glorious pieces of '80s animation so you can bet I'll be breaking down more from G.I. Joe and other favorites.