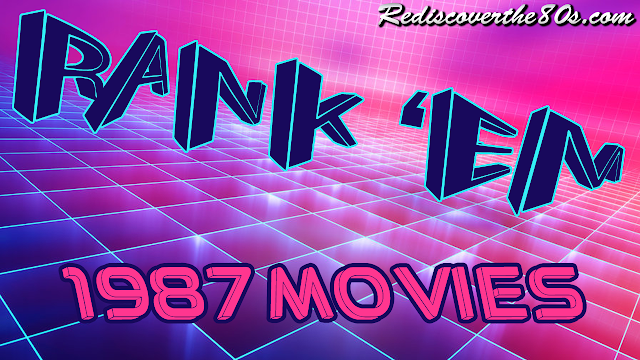 Rank 'Em is back and now in podcast form! It's time once again to make some difficult choices and rank your Top 5 favorites from the '80s among several categories. 2017 marks the 30th anniversary of 1987 releases and we'll be revisiting your favorite movies, TV shows, albums, and more.

In case you need a refresher, Rank 'Em feature me and a guest to post (and now voice) our Top 5 lists along with a brief summary of why our selections were chosen. New for 2017, we will be expanding the conversation on a new Rank 'Em show via the Rediscover the 80s Podcast! Once you have finished reading and listening to our selections, we encouraged you to join us by posting your Top 5 in the comments below so we can further the discussion. Remember, each list should be based on your personal favorites and not necessarily what "should" be the Top 5 based on popularity.

Our first topic is movies and to help me rank the best film released in 1987 is Chad E. Young of HorrorMovieBBQ.com! Chad hosts a great blog featuring movie reviews, VHS rarities, and thrift store finds. He's also just started his own podcast! I had the pleasure of being one of the first guests on the show and breakdown G.I. Joe: The Movie (which actually debuted in 1987.) As his site eludes to, Chad has a great perspective on horror films as well as '80s & '90s pop culture including pro wrestling and cartoons.

The top grossing films of 1987 had quite the variety from comedies, thrillers, action, and drama. Take a look at the Top 10 for some context...

Now, it's time for the big reveal. Our favorites from '87 definitely do not cater to the top box office movies although a couple did make it onto Jason's list.

Want to know more about our picks and some honorable mentions? Listen to the podcast! Find the Rank 'Em: 1987 Movies show in the Rediscover the 80s Podcast feed now! Also, post your Top 5 list in the comments below so we can continue the conversation.

You can also catch up on previous Rank 'Em lists by visiting the Rank 'Em Archive. Never too late to post your list!
Newer
Older