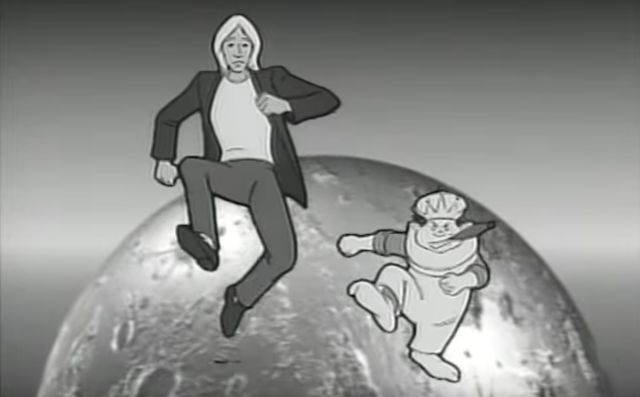 I can remember when I consumed MTV (more specifically, music videos) on a daily basis. In fact, music imagery was synonymous with the actual audio in my formative years. Hearing a song on American Top 40 that I liked instantly led me to watching the music video on MTV. Likewise, watching MTV veejay's like Martha Quinn and Alan Hunter debut new music videos often pointed me to my local record store (or to my mom when I was younger) to pickup the latest single.

So what are some of my favorite music videos from those early MTV years? It's really difficult to narrow down just a few favorites as I could probably put together a Top 50 or 100 list without much effort. But for the sake of space or flipping through one of those annoying slideshows, I'm listing 5 of my favorites that I enjoyed from the moment I first watched on MTV...


Tom Petty and the Heartbreakers "Runnin' Down a Dream" - Full Moon Fever was essentially my motivation to dig deeper into Tom Petty's music. I remember watching the Alice in Wonderland style video for "Don't Come Around Here No More" which was several years earlier. But songs like "I Won't Back Down", "Free Fallin'", and the 4-minute cartoon that was "Runnin' Down a Dream" are what peaked my interest. Of course, I've love cartoons and animation to this day and watching Tom and his cigar-smoking friend travel through a black-and-white dream world was so entertaining. And up to that point, I don't think much animation was used in music videos.


Run-D.M.C. feat. Aerosmith "Walk This Way" - This track made a huge impact on my musical taste, opening the door for rap and hip hop into my primarily Top 40 collection. Raising Hell was the first album I owned on cassette and "Walk This Way" was the main reason I purchased it. The music video made the collaboration a truly iconic moment with Run-D.M.C. battling Aerosmith in the early stages of the video and then finally joining together for a fun end sequence.

Peter Gabriel "Sledgehammer" - I'm what most people refer to as "easily amused" and the video for "Sledgehammer" always had my full attention every time I caught it on MTV. The stop-motion animation was almost hypnotizing to me and just unique from any other video I remember watching up to that point. It's also the track (and So album) that introduced me to Gabriel's music and would later find me purchasing a 3rd Bass album in the early '90s (also a great music video.)

Dire Straits "Money For Nothing" - Again, it was easy to be amused by the "Money For Nothing" video which showcased some early computer-generated animation. The video also featured rotoscope technology which infused bright neon colors into the band's performance. Add in a killer guitar riff, "I Want My MTV" lyrics, and backing vocals by Sting and you can see why the single was a #1 hit and won several awards.

Ray Parker Jr. "Ghostbusters" - The music video for "Ghostbusters" was a great supporting piece to the film and had lasting effect on the franchise. Of course, I love all the neon in the haunted house, the celebrity cameos, and spliced footage from the film. But the scene of Ray Parker Jr. dancing with the crew in New York City had perhaps the most impact as it would be reenacted in the intro for the long-running Real Ghostbusters animated series and in the 2009 video game trailer.