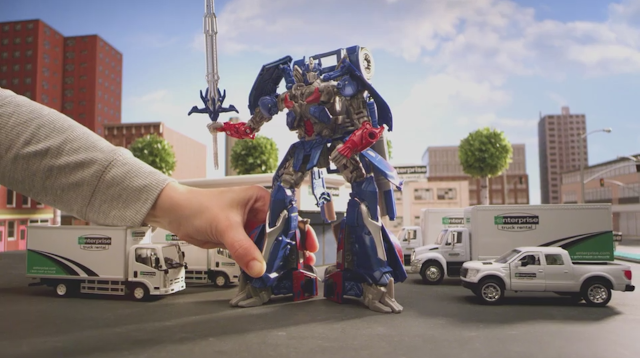 Remember all those Transformers toy commercials from the '80s that showed kids battling each other with the latest Autobots and Decepticons? To coincide with their partnership and release of Transformers: The Last Knight, Enterprise Rent-A-Car has produced a new TV commercial that will make you want to get your toys out of storage.

The new ad features two boys playing with the latest toys in front of an Enterprise store. They battle using the Autobots leaving the evil Megatron to answer "how do you like that customer service??!!" It's a fun throwback that also features footage from the new film that hits theaters June 21. Check it out below...

Rent, Buy or Share with Enterprise and the New Movie,“Transformers: The Last Knight,” from Director Michael Bay

ST. LOUIS June 1, 2017 – Get ready to roll out: The Autobots and the “auto rental bots” are joining forces to move us all forward!

Enterprise Rent-A-Car today announced a partnership with Paramount Pictures on the highly anticipated release of the new movie, “Transformers: The Last Knight,” directed by Michael Bay, in theaters June 21. Through the partnership, Enterprise is producing custom movie-themed digital content and promotion in branches throughout the country.

“While many may know Enterprise as simply a car rental company, we’ve done some evolving over the years to offer customers much more. Whether you’re looking to rent, buy or share a vehicle, Enterprise has you covered,” said Lee Broughton, vice president, Enterprise Brand Marketing. “That brand promise, coupled with our new content strategy – focused on helping our customers pursue their passions – led us to teaming up with ‘Transformers: The Last Knight.’”

As part of the campaign, Enterprise has created a nostalgic video throwback to Hasbro’s Transformers toy television commercials from the 1980s. The video shows two kids using their Autobot action figures to fend off the evil Decepticons, with some added assistance from Enterprise’s rent, buy and share offerings. In one scene, as an Enterprise rental car helps take down the Decepticons, one of the children can be heard asking, “How ya like that customer service, Megatron?”

In addition to the video, Enterprise customers will also notice movie-themed signage inside Enterprise branches through June.

“Enterprise has found a clever and creative way to remind Transformers fans of the toy heritage of the movie franchise while introducing their expanded brand offerings,” said LeeAnne Stables, president worldwide marketing partnerships and licensing for Paramount Pictures. “This is a great way for us to reach summer travelers and ramp up excitement for the new film.”