‘Christmas Vacation’: 6 Injures That Should Have Sent Clark To The Hospital 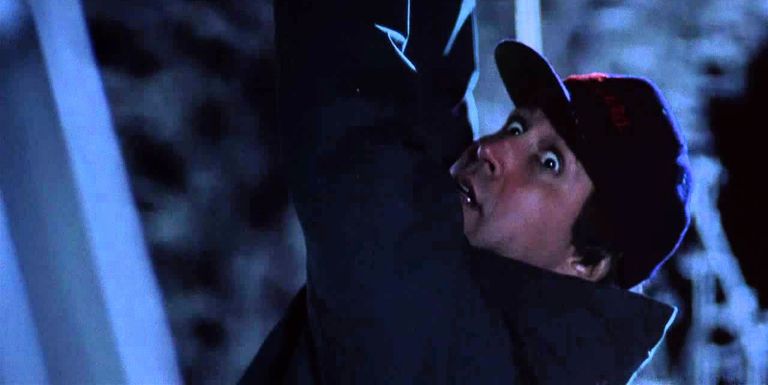 After each viewing of my favorite Christmas movie National Lampoon's Christmas Vacation, I come to a conclusion that I typically overlook while watching…Clark Griswold should’ve spent Christmas in the hospital.

For as many bumps as he takes like falling off the ladder and the rooftop, he really should have sustained multiple injuries (some serious) throughout the film. Most would have been physical afflictions, but I also suspect some mental trauma would set in after experiencing the holiday from hell.
The ironic part is, Chevy Chase actually did injury himself during the filming of the movie. In the scene when he is trying to illuminate the exterior of the house and punches the Santa Claus figure in frustration, he actually broke his pinky finger.
As far as the injuries his character suffers during the film, I count at least six instances where Clark would’ve required some medical evaluation or even an ambulance trip to the ER. See if you agree with the following injures:

Although life saving, seat belts can cause injury during front end collisions. After launching the family truckster over a snow bank in the opening scene, it collides with the “trees” sign and plummets head-on into a snow bank.

Clark could have easily come away with a nice lengthy abrasion from his shoulder to his abdomen thanks to the seat belt. Depending on the impact, fractures of the sternum or ribs are also common seat belt injures. Not to mention the other family members who apparently weren't wearing seat belts (Audrey) who ends up in the front seat after the collision.

A Broken Nose and a Concussion

After becoming trapped in the attic when attempting to hide his Christmas presents, Clark nearly knocks himself out with the planks laid across the attic floor. He steps on a board and whacks himself in the face three times which should have made his nose look Rudolph’s after a prize fight with Sugar Ray Leonard.
Then, in an attempt to get the family’s attention, he punches the bottom of the swivel attic vent which could have easily left a nice welt on top of his head.

There are a couple of instances where Clark finds himself on the inside of a fir tree. And although the needles on these trees are typically not sharp, falling in one from a rooftop would probably mean several scrapes from branches to his exposed hands, arms and face.
He also likely got scratched up when unleashing the Griswold Family Christmas Tree in the living room.

Whiplash and a Broken Arm

Attempting to break the amateur recreational saucer sled land speed record would have definitely come at a price. Smashing through the side of a cabin and various snow drifts should have caused some neck trauma.
It is also safe to say that ramming into the toy collecting bin at the local Walmart should have been worth at least a broken arm as well. A gift that would’ve kept on giving to Clark over the next month would have been a sling and a neck brace.

Frustrated that the 250 strands of imported Italian twinkle lights are not working, Clark violently whips the extension cords in the lawn like he’s trying to rope cattle. For someone who works in an office all day, this action would most likely cause inflammation of the rotator cuff and bicep tendons in his arms and shoulders.
Upon waking the next day, he should have felt like he tried to play tug-of-war with the “tenement on wheels”.

After a Christmas like Clark experienced, even though he did acknowledge that he made it through the holiday, I have a strong speculation he would be afraid to gather the extended family for another Christmas vacation.
The nervous breakdown as evidenced by the post-Jelly of the Month Club outburst proves the occurrences experienced that week probably became a traumatic event for Clark. Frankly, I can’t blame him for taking the trip to Vegas to block out this hellacious Christmas experience.
(I originally wrote this article for UnderScoopFire and is being republished here with permission.)
Newer
Older