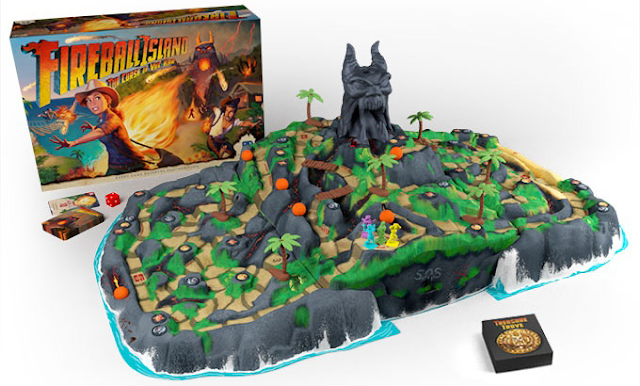 The holy grail of 1980s board games is officially being restored to modern glory. Fireball Island, the adventure game with the 3-D map and marble rolling action, has been funded through Kickstarter and can be yours by the end of 2018! In less than one hour, the "bigger, taller, faster, and cooler" Fireball Island: The Curse of Vul-Kar surpassed it's $250,000 campaign goal. (At last check, the campaign is over $1.1 million!)

I can write paragraphs on my totally rad memories of this game, but first, have a look at this promo video of the rebooted game...

I never owned Fireball Island as a kid, but had a friend who did and would periodically play the game when I visited his house. There was truly nothing to compare this game to with its mountainous board of treachery and treasure collecting quests. I remember we would each choose two characters to play a 4-player game even when there was just two of us.

I'm beyond excited that Fireball Island is getting a modern reboot for those of us who don't want to spend hundreds on Ebay to collect a vintage copy. The expansions for the new game look pretty fun (especially the pirate ship) and the additions like shooting multiple marbles down the board will definitely improve on my fond memories of the game.

Head over to the official Fireball Island: The Curse of Vul-Tar Kickstarter Campaign and preorder your copy before May 3, 2018. My guess is local comic shops and toy retailers will have these on shelves before Christmas, but pledge now to secure a copy. The base game is $60 or snag the complete experience with the game and all expansions for $130 (which is still less than half of what you'll pay to own a complete vintage copy on Ebay!) Expected shipping date is November 2018.
Newer
Older
Powered by