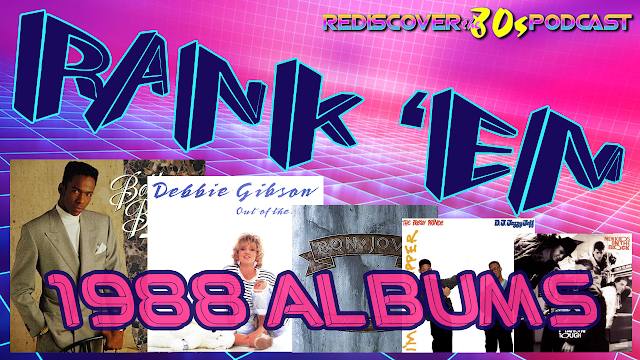 Crank up your boomboxes because Rank 'Em is back with another Top 5 countdown podcast! Continuing the 30th anniversary of 1988, it's time to dive into the pool of music albums. Jason welcomes Corey Chapman, host of The Chap Report (now featured on the Nerd Lunch Podcast,) to rank our favorite albums that were released (or were popular) in 1988.

We begin, as now the norm, with some context by running down the top 10 albums according to the 1988 Hot 100 charts as well as some results from the 1989 Grammy Awards and even some historical events in music. Then we dive into our Top 5 lists which include a wide variety of genres including pop, rock, rap, and R&B.  If you listen to the podcast version (versus YouTube) you'll hear some tracks mixed in from the albums chosen! Leave us feedback on Twitter @RD80s and @chapmanrunner or play along by leaving your own Top 5 1988 Albums in the a comments below.

Listen to the podcast now on your favorite app (now including iHeartRadio), download using this direct link, or watch our recording session via the RD80 YouTube channel embedded below...