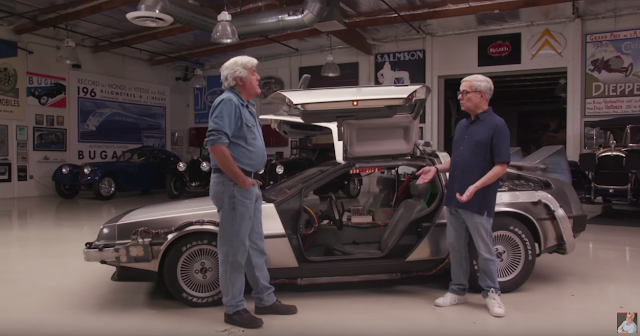 Bob Gale, creator/producer/writer of Back to the Future, recently paid a visit to Jay Leno's Garage with a replica of the famous DeLorean Time Machine. Leno also welcomed restorers Terry Matalas and Joe Walser who not only built the featured car but also restored the original screen-used DeLorean (as featured in the documentary film Outatime: Saving the DeLorean Time Machine.)

The video discusses a fun mix of origins behind the movie, the history of the car itself, and also how the restorers teamed up to work on the original car. Leno also tells a fun story about how Johnny Carson, who was an initial investor for the DeLorean Motor Company, got locked inside one of the original cars. You'll also learn about the painstaking detail that goes into actually replicating all the gadgets and additions to a car without any blueprints to follow.

Check out the video below as featured on the Jay Leno's Garage YouTube channel...