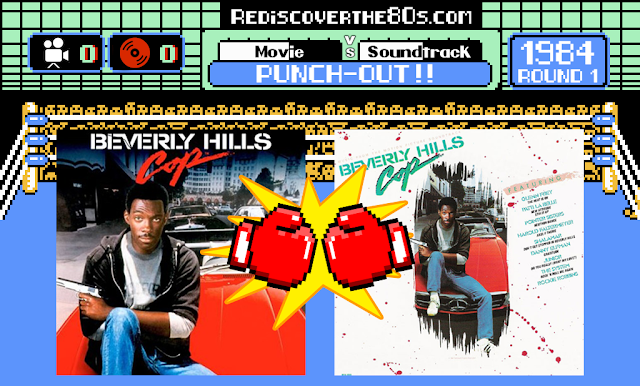 Can you imagine watching the Breakfast Club without hearing "Don't You Forget About Me?" Do you think of John Cusack holding a boombox over his head every time you hear Peter Gabriel's "In Your Eyes"? Movies and music go hand-in-hand, but if you had to choose just one...which would it be? "Movie vs. Soundtrack Punch-out!!" will determine once and for all if the movie or the soundtrack was better! Each bout includes a brief overview, a look at the commercial success of each and then, the legacy. I'll be casting my vote, but since I'm not the only voice in the '80s universe, a poll will be posted for everyone to cast their vote and decide who comes out as the champion!

Beverly Hills Cop is a 1984 action comedy film starring Eddie Murphy and directed by Martin Brest. It's the story of Detroit police officer Axel Foley who travels to Beverly Hills following leads from his childhood friend's murder. Under the ruse of a vacation, Foley continues his investigation with the reluctance of the local police department as he suspects an art dealer might be involved.

Paramount Pictures executive Don Simpson came up with a movie idea in 1977 and hired Danilo Bach to write the screenplay. In 1983, Simpson hired Daniel Petrie to rewrite the straight action film with comedy. Producer Jerry Bruckheimer initially hired Mickey Roucke as the lead character Axel Foley. Revisions and other delays caused Rouke to leave the film with numerous others then considered like Sylvester Stallone, Richard Pryor, Al Pacino, and James Caan. The ultimate choice of Eddie Murphy seemed to be the correct one as the film would become acclaimed by most critics and a huge commercial success.

Beverly Hills Cop was the highest grossing film of 1984 with over $234 million in the US and another $81 million internationally. The film held the top spot for 14 non-consecutive weeks (tying a record) and was the highest grossing R-rated film of all time until The Matrix Reloaded surpassed it in 2003. Despite the thumbs down by film critic Siskel and Ebert, other critics from the New York Times and Time magazine would acclaim Murphy's performance as what he does best: "the shrewdest, hippest, fastest-talking underdog in a rich man's world." The film's screenplay would also be nominated for an Academy award and Golden Globes for Best Comedy and Best Comedy Actor. The film would win the People's Choice Award for Favorite Film.

A contributing factor to the success of Beverly Hill Cop was it's popular and award-winning soundtrack. The compilation album, mastered by Greg Fulginiti, featured the international #1 hit "Axel F" by Harold Faltermeyer and the top ten singles "The Heat is On" by Glenn Frey and "Neutron Dance" by the Pointer Sisters. The soundtrack is has been certified 2x platinum (2 million copies sold) by the RIAA and Faltermeyer's film score would earn him a Grammy award for Best Score Soundtrack for Visual Media.

The legacy of Beverly Hills Cop remains strong with three films in the franchise that made over $735 million at the worldwide box office. The original film has landed on several media lists for best comedy films of all-time and holds a Rotten Tomatoes audience and Tomatometer rating of over 80%. An unaired 2013 TV series pilot has threatened to become the 4th film in the franchise, but no official timetable has been set. Faltermeyer's score from the film was released in 2016 by La-La Land Records including several songs from the original soundtrack.

MY VOTE: Being an R-rated film and me being only 8-years old in 1984, I was way more into Ghostbusters that year than Beverly Hills Cop. I probably didn't watch the theatrical version of the film until the '90s, likely about the time the third film was being released. I do, however, have vivid memories of hearing "Axel F" on my friend's record player as a kid. So having said that, I have much deeper roots to the soundtrack versus the film. I do enjoy the first film (the others not so much) and will watch on occasion through streaming services, but I happily own the soundtrack album on vinyl and will spin quite a bit more than movie. So my vote goes for The Soundtrack!

Agree? Disagree? Place your vote in the poll below and tell me why in the comments! If you simply can't decide...you can always vote for both!


More articles can be found in the Movie vs. Soundtrack Punch-out! Archive