The Best Bubble Gum TV Commercials From the '80s 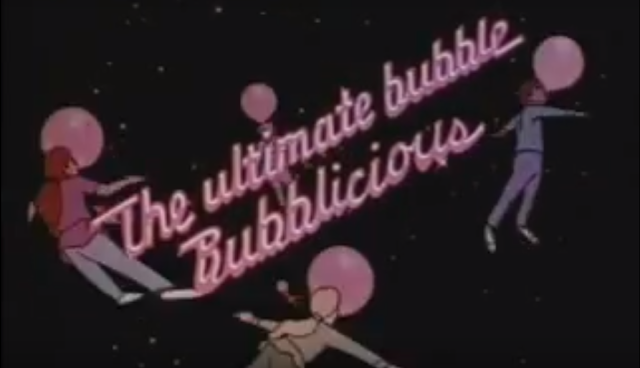 There was an epic advertising battle for our taste buds in the '80s, particularly the ones that craved chewing gum. Brands like Juicyfruit, Big Red, and Doublemint used catchy jingles and cheesy montages of models folding a stick of gum into their mouths to grab our attention on TV. But those brands were what you asked your parents for as a last resort. As a kid in the '80s, it was all about the bubble gum.

The bubble gum advertising wars did battle mainly on Saturday mornings during those long cartoon blocks. From animated kids flying in outer space to MTV-like music videos, bubble gum companies spared no expense to entice kid's minds into their next purchase at the grocery store (or even candy store. Remember those?)

Bubble gum commercials tried to appeal to kids through old west gunfights, song-and-dance numbers, animated dream sequences, popular film character parodies, and video gaming. I'd have to say most of it worked. Looking back on them now thought, most ads look a little hokey but there are a few I have much more appreciation for now simply based on what was likely cutting edge technology in the advertising industry.

Let's rediscover the bubble gum wars of the '80s and specifically some of the best TV commercials that were produced. We'll also encounter several actors whose early careers included promoting bubble gum on television.


Some of the best ads (and probably my favorites) came from Bubblicious in the early '80s. They used animation of kids flying away when they blew a bubble. Then later in the ad campaign, they added a live action segment at the beginning and end where kids would morph into animated versions of themselves and be whisked away into the sky. This one for the new raspberry flavor also showcases an intergalactic game of pinball.


Bubblicious Remixed! This one minute ad from 1984 takes footage from earlier commercials and adds in a radical new wave track. It's a pretty crazy concept to remix your own bubble gum commercials just to include fresh music, but I definitely would've wanted the cassingle from this ad had it been a mail-away item.

The image of Mikhail Gorbachev saying "bazooka bite" will be ingrained in my memory banks forever. But the one of the Native American saying "bazooka" now seems a little awkward.

While I chewed a ton of Hubba Bubba, the gumfighters in their commercials probably least connected with me from the other brands. However, I was known to sit down with my dad and watch weekend marathons of Western TV shows.


When did Indiana Jones trade in his whip for a pack of Tidal Wave?! I don't specifically remember this commercial, but to help the ad campaign stand out a little more, they should've had flavors like "Rolling Boulder Blueberry," "Sankara Strawberry," and "Face Melting Mango."


Just when you thought this ear worm had left your head, "Bubble, ubble, Eez. Bubble, ubble Gum" returns! The marketing team behind this commercial was brilliant because they understood a kid's rationale that anything originating from outer space is 1000% cooler.


Yes, the Karate Kid was once a member of a Sugarhill Gang tribute band...in a weird bubble gum factory. While he's featured more in the ad above, I kinda like this Bubble Yum ad better with Macchio just dancing in the background.


While Leo DiCaprio is instantly recognizable now, Omar Gooding (who co-hosted Nickelodeon's Wild and Crazy Kids) was the much bigger star to me back then of these two short Bubble Yum commercials crammed into one.


Bubble Yum ended the '80s with ad campaigns geared more towards the MTV teen crowd. The Wacky Fruit, Rockin' Raspberry, and Luscious Lime music video commercials have elements that were definitely inspired by Peter Gabriel or The Cars.


Before he helped put people in jail as a bailiff on Night Court, Richard Moll was actually part of Russian crime outfit whose sole purpose was to steal the world's supply of Bubble Yum.

I can see this Bubblicious commercial being played during Saturday Supercade, which you might remember was a compilation of cartoon shorts featuring characters like Q*Bert, Frogger, Pitfall Harry, and Donkey Kong.

While this commercial is actually from the early '90s, I always felt it had a You Can't Do That On Television vibe.

Remember any other bubble gum commercials from the '80s that left a lasting impression?
Leave a link in the comments.