Comic Review: Rainbow Brite Is The Fearless Rainbow Warrior We All Need 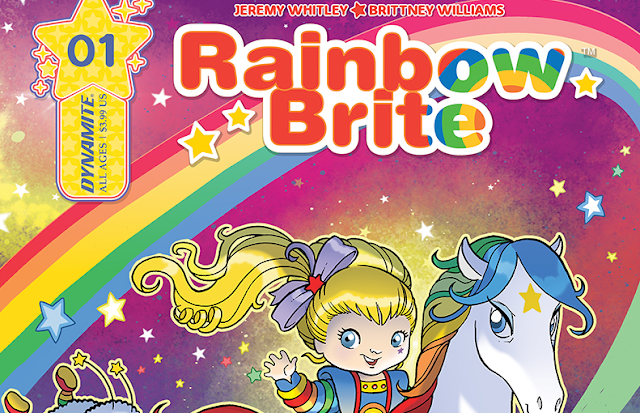 Revivals can be tricky. The creators must walk the very thin (and often impossible) line of creating something that sparks new interest, while being able to keep the original fans happy. Remember, the children who loved these properties are now the adults holding the purse strings and, as millennials, we are fiercely fickle. While we want new product we can share with the youth of today, we don’t like people reaching back and messing with our childhood. It’s sacred. And, for me, the most coveted part of my formative years is a lovable little girl who brought color and happiness to the universe - Rainbow Brite.

My childhood is painted with the colors of Rainbow Brite. She was the hero I needed when I didn’t have a hero I could turn to. She and her friends were my family, and I’ve followed their adventures through thick and thin and have never wavered in my love for them. In fact, I loved her so much that, to this day, there are friends and family who still call me Rainbow Brite. So, when I heard about an all-new ongoing comic book series, I was intrigued but worried.

Then I read it.

Released through Dynamite comics, the series gives Rainbow Brite a chance to be that hero she was for me to a whole new generation of kids and, after reading the first issue, I can honestly say they’re going to love her!

Written by Jeremy Whitley, the comic book begins on Earth (or at least a world similar to Earth) and follows Wisp (Rainbow Brite’s name before taking on the mantle of Rainbow Brite) and her best friend Willow who, while larping (Live Action Role Playing), imagine themselves as a wizard and a warrior who must save the world from dark and menacing creatures. Then, in the night, real monsters attack. Without thinking, Wisp leaps into action, running into danger without a second thought to protect the people she loves. After meeting a familiar face (to fans of the 80s cartoon) from Rainbow Land, she embarks on an adventure that will change her life and save the universe. The character choice to make Wisp a warrior, as simple as it may be, filled me with so much joy that I almost cried. Because, for me, she always was a warrior - a protectress who saved me from the shadows more times than I can count. I am so impressed by Whitley’s storytelling, and I cannot wait to see where he takes these characters.

In a comic book about Rainbow Brite, color and art are important and artist Brittney Williams did an amazing job while colorist Valentina Pinto also went above and beyond. As cute as the 80s version of Rainbow Brite was (and is), a five year old in moon boots doesn’t make for the best comic book superhero, so aging her up (though only slightly) was a necessity. And she looks perfect. Willow, a new character to the world of Rainbow Brite, is as equally adorable and I’m certain will become a beloved addition to the world. My biggest fear about the stylistic change was to Twink (or Twinkle, as is his full name). Not only is he one of my favorite characters but his original voice actress, Robbie Lee, is one of my dearest friends - so needless to say, I’m more protective of him than almost every other character. But, he’s adorable (and would make a great plush to sell with the comics in case Dynamite is reading).

Though the line is thin, Dynamite is walking it with ease. Their version of Rainbow Brite is a hero for a new generation - strong and ready for adventure while also being grounded in what made us babies of the 80s fall in love with her: imaginative, kind, and a true symbol of happiness and hope.

Find the new Rainbow Brite comic at your local comic shop on Oct 3 2018 or preorder from online retailers like Things From Another World. You can also preorder a digital version now from Amazon/Comixology.