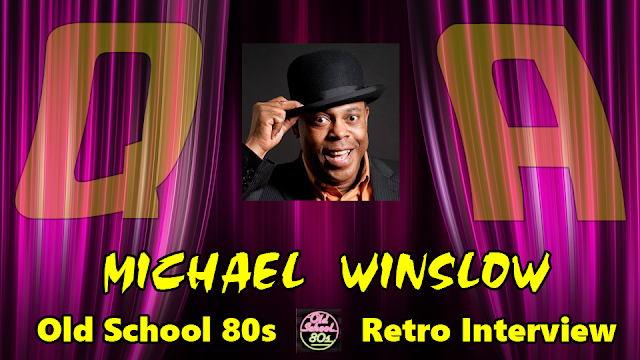 (This interview was originally published November 2, 2011 on the now-retired Kickin' it Old School blog. It is one installment in an incredible series of interviews we are republishing on Rediscover the '80s for posterity and your enjoyment. These are more than just interviews in a way; they are more like '80s timelines or oral histories on their respective subject matters. Please keep in mind the original date because some content could be specific to the time of the interview, though the majority should be timeless and totally rad.) 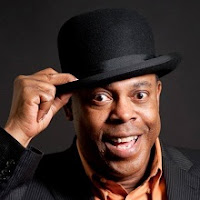 This time that awesomeness is Michael Winslow. He is the "Man of 10,000 Sound Effects" and '80s fans should remember him well from the Police Academy movies among other roles. He has the amazing and uncanny ability to recreate countless sound effects with his mouth. This unique talent has landed him many movie roles and commercial spots as well as supported his work as a stand-up comedian, host and motivational speaker. You will find out a little more about his background, his memorable film roles and more as we get on to some selections from my interview with Michael Winslow...

Q: At what age did your extraordinary sound effects talent begin to develop? How much, if any, came naturally?

Michael: From birth...I have pitch perfect hearing according to the Guinness Book of World Records. 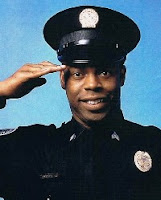 Q: At what point did you realize that this could help become a career?

Michael: I have always wanted to be an actor and make noises. I took drama classes in high school then fled to L.A. I was mobile homeless until I went on The Gong Show and won $516.32, got a job at the American Beverage Company, got a car, some roommates with the same desire and never stopped.....


Q: Who or what inspired you when you were just getting started?

Michael: I lived on an Air Force base and had a regimented childhood. Life taught me that I wanted to do something different.

Winslow has also said, "Growing up on an Air Force base made it difficult to have friends, so I created imaginary friends, dogs, cats, trucks, anything that would keep me occupied for the moment." 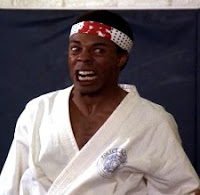 Q: Please tell us about the role that Count Basie played in getting you your big break getting cast in Police Academy as a result?

Michael: The producer Paul Maslansky and director Hugh Wilson were there to see Count Basie and picked me up, gave me creative freedom, named me "Larvell Jones" and it was on....


Winslow was the opening act for two shows for Count Basie and his orchestra at the Long Beach Theater in the Spring of 1983. Maslansky and Wilson, who would be the producer and director respectively of Police Academy, just happened to be in attendance for one of them and were very impressed with Winslow. In another interview, Winslow recounted meeting with Maslansky and Wilson after that show: "We got a chance to sit with Count Basie in the same room, one of the things he said was 'you guys take real good care of this young man, make sure that they see him and they enjoy what they see him do'." That's quite an endorsement!

Q: What were your expectations heading into the first Police Academy? Were you nervous at all? Did you ever expect that it would go on to have one sequel, let alone six sequels?

Michael: There were no expectations. No one thought it would make it, but here we are. I just did my best as I do now. Every show is nerve racking! 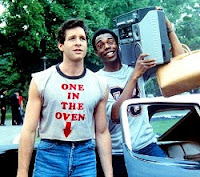 Police Academy was released in theaters in March of 1984. The R-rated comedy was a surprising worldwide commercial success and ended up as the sixth highest grossing film of 1984 in the U.S. The original featured an ensemble cast of mostly relative unknowns including Steve Guttenberg, Kim Cattrall, Bubba Smith, Marion Ramsey, David Graf, Leslie Easterbrook, George Gaynes and G.W. Bailey, but it was Michael Winslow as "Larvell Jones" which grabbed my attention and made me laugh the most. Here is a montage including the scene from Police Academy where we are introduced to "Jones" as well as some of his other finer moments from the original and sequels...

Q: The Police Academy cast included some real characters. First, please tell us a little about Steve Guttenberg and working with him. How about the rest of the cast? Did you become close as a cast during filming the first one? Other than obviously making a sequel every year, did you continue to stay in touch after and even today? 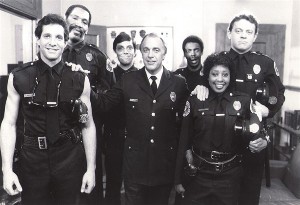 Michael: Steve is my friend and awesome to work with. We are all still friends. We miss Bubba Smith ["Hightower"]....and David Graf ["Tackleberry"] who are now policing Heaven!! We are close and look forward to working together again.


Q: I personally find humor in all of the sequels, but they have received mixed reactions especially by the fourth, fifth, sixth. You have appeared in all of them, but some others did not return for all of them. Did you ever consider walking away from the "Jones" character?

Michael: Never will I walk away from my alter ego!!

There have been six film sequels released: Their First Assignment (1985), Back In Training (1986), Citizens On Patrol (1987), Assignment Miami Beach (1988), City Under Siege (1989) and Mission To Moscow (1994). In addition, there was an animated television series which ran for 64 episodes in 1988 and a live-action television series which lasted 26 episodes in 1997-98. Michael Winslow is the only cast member to star in all of these projects.

Overall, the Police Academy franchise has been very successful grossing about $250 million in U.S. theaters alone and that does not include video rental/sales and worldwide gross. The original and first three sequels performed admirably at the box office, but none ever received much critical praise. The popularity continued to decrease and the franchise took a well-deserved break at the end of the '80s. It attempted a comeback with a 1994 sequel and the 1997 television series, but neither proved to resurrect the franchise at that time. Now, it's nearly two decades since the last sequel and maybe the time is now to return to the academy again.

Q: You did voice work in 1984's Gremlins. I have seen conflicting information of which voices you did. Did you do the voice of "Stripe"? How did the opportunity come to you?


Michael: I am the voice of "Stripe" the ugly Gremlin leader. I got the job because I auditioned for a voiceover part.

Gremlins was directed by Joe Dante, written by Chris Columbus and produced by Steven Spielberg. It was released in theaters in June of 1984 (the same day as Ghostbusters) and was a huge commercial success ending up as the fourth highest grossing film of 1984 in the U.S. It has to be one of the scariest PG movies of all time and some of that is due to Winslow's "Stripe" voice. In fact, along with Indiana Jones and the Temple of Doom, it helped influence the MPAA to create the PG-13 rating which went into effect in August of that year. Here is a scene from the end of Gremlins featuring the evil "Stripe"; he's the one with the white mohawk and Winslow's scary voice...

Again, in another interview, Winslow discussed it further:


"One of the things about working on Gremlins, you learn the value of a great story. And just to be a part of it, even a little bit of it. And I know a lot of folks who told me that when they were kids, and when they saw Gremlins, they had to look under their beds. I didn't mean for it to be like that. But you know what was scary for me? Spaceballs. Mel Brooks is Mel Brooks. You better be ready."

Q: Speaking of Spaceballs, what can you tell us about Mel Brooks and your experience as the "Radar Technician" in 1987's Spaceballs?

Michael: I love Mel Brooks and loved the opportunity to be in Spaceballs. I wish there was a Spaceballs 2! He is Awesome. The set and experience was indescribable fun.


Spaceballs is a comedy parody of the Star Wars trilogy directed, produced and co-written by the legendary Mel Brooks. It was released in theaters in June of 1987 to moderate success, though it has gone on to become a cult classic and one of Brooks' most popular films. Winslow is featured as a "Radar Technician" in a small role that utilizes his incredible sound effects ability (bleeps, sweeps, creeps). The following scene includes Winslow's hilarious appearance in Spaceballs (he comes in at about the 1:00 mark)...

Q: Some '80s stars "run away" from the '80s and some embrace the success and fans from that decade. (If at all) How do you personally deal with and keep the '80s alive and in perspective?

Michael: I love the '80s and everything about it!


Q: What is your favorite sound effect that you do? Which one gets the biggest reaction when you do it?

Michael: It is difficult to say, that is like asking which child is your favorite. Musical instruments get the biggest reactions....Jimi Hendrix, Led Zeppelin.


Here is a recent video of Winslow performing Led Zeppelin's "Whole Lotta Love" (originally from 1969) on a Norwegian talk show. It starts a little slow, but then goes to another level. I can't believe he is doing that all with his mouth including the distortion. Who needs an electric guitar? Unreal... 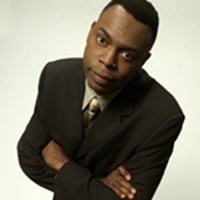 He is still out there amazing the world with his talents. In addition to the occasional film and television appearance, Michael Winslow is out performing literally all over the world with his unique comedy show. Pure genius and certainly worth seeing if he makes a stop in your town.

I am grateful that Michael took some time to answer my questions so I could share them with you here. Special thanks go to his wife, Sharon, who helped coordinate the effort. Please be sure to visit his official website at MichaelWinslow.org or his Facebook page to stay up to date with everything he is doing now including his tour schedule and more.

I want to take this opportunity to again thank Michael Winslow for his incredible contributions to '80s pop culture especially through his Police Academy character and, even more, for going back to the '80s with us here for a little while as well.