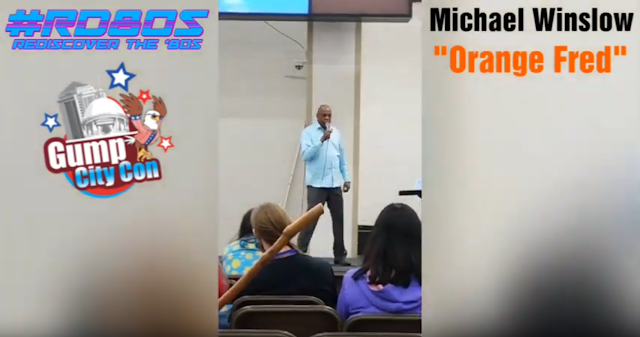 I had an awesome opportunity during Gump City Con to watch one of my childhood heroes perform live. Michael Winslow, the comedian/actor who played Larvell Jones in seven Police Academy films, was one of the guests of honor at the con. While I was too young to catch some of the earlier Police Academy films, Police Academy 6: City Under Siege is one that made a lasting impact in my teenage years. It was practically my introduction to the film series and his sound effects, although I'm not sure if it had been before I saw him in Spaceballs.

If you know "the man of 10,000 sound effects," then you have probably seen Winslow covering Jimi Hendrix in his stand-up acts and also in Police Academy 6: City Under Siege. If you don't remember him performing Hendrix, then you might have seen him more recently covering Led Zeppelin on a talk show. His uncanny ability to imitate and generate sounds (specifically the electric guitar) is unmatched. In anticipation of seeing him perform live, I was certain we would here some classic rock covers but never expected this.

Winslow did perform his "Whole Lotta Love" cover of Led Zeppelin at the con but he also introduced me to "Orange Fred" which he announced is Pink Floyd's cousin. What came next was a fun cover of their track "Breathe" which combined the famous guitar licks along with some additional lyrics and a scavenger hunt for Pokemon (Pikachu in particular.) Check out the clip below of "Orange Fred" that's been uploaded to the RD80s YouTube channel. Plus, look for more clips from Winslow's performance in the future.