Why Children of the '80s Can't Get Enough 'Stranger Things' 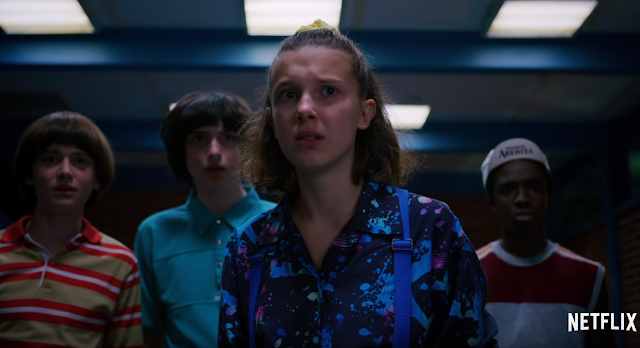 A decade is ten long years and no decade can really be described by a single characteristic, culture or ideology. This is definitely true of the 1980s with several distinct events and traits that define the decade.

The '80s era was the final decade of the Cold War. Fashion sense was extreme and starkly different with loud color combinations and neon styling. The cable network MTV helped popularize current styles, fads, and artists in the music video world. Movies were epic and perhaps the most memorable aspect of the decade with blockbusters focusing on science fiction and the paranormal. It was also the "Decade of Decadence" by spawning crass materialism and consumerism, marked by the rise of "yuppies." Entertainment came more into into homes with personal computers, video game consoles, and video rentals.

Past periods have a habit of making comebacks and they do these in different ways. Old styles and pastimes often resurface decades later, though maybe in slightly altered forms. Present forms of entertainment could be based on past decades and these bring back memories. For instance, the appeal of videos games was highly increased in the '80s and now through numerous retro slots, those who still have a love affair with retrogaming can get the modern equivalent.

But the '80s love affair extends beyond technology to the cultural, social, and political environment of those times. And there is no better way than to connect with the culture than through '80s period movies and television shows.

Stranger Things, the Netflix science fiction horror television serial, has focused on a missing boy and supernatural events in the fictional town of Hawkins in Indiana for three seasons now. Viewers and critics have pointed out the built-in existence of several elements during the 1983-1985 time period that has created such a realistic backdrop to the story.

The Stranger Things soundtrack is composed by Michael Stein and Kyle Dixon of the electronic band Survive, who extensively use synthesizers in homage to 1980s artists and film composers.

Stranger Things has drawn inspiration from the themes and directorial aspects of the works of prominent '80s film directors Steven Spielberg and John Carpenter. You also see flashes and elements from movies like Star Wars, Back to the Future, and Stand by Me.

The character Joyce was developed on the basis of Neary in Close Encounters of the Third Kind. The title sequence has been inspired by movies like Altered States and The Dead Zone. You will find elements of E.T. the Extra-Terrestrial and Indiana Jones in the series posters.

Some of the imagery from the series has been taken from Stephen King book covers.

Stranger Things has referenced video games like Silent Hill, Dark Souls and The Last of Us. The series opens with a game of Dungeons and Dragons, which was so popular in the '80s that it received its own Saturday morning cartoon. The popular puzzle Rubik's Cube also makes an appearance in one episode.

You will find many movies and TV shows set in the 1980s, but Stranger Things has gone one step further than most shows by initiating a revival of the culture itself from which it draws inspiration from. Stranger Things merch has also exploded across many platforms including comics, games, toys, and collectibles.

Founded in 1986, Dark Horse Comics is an American comic book and manga publisher. They have adapted licensed '80s franchises in the modern day like Aliens, Conan and Star Wars. Dark Horse Comics announced a partnership with Netflix for a multi-year publishing line of stories set in the Stranger Things world. Products so far have included:

Hasbro published a licensed version of a Stranger Things themed Dungeons & Dragons starter kit earlier this year, reviving interest in the popular '80s pastime. The kit is based on the campaign "The Hunt for the Thessalhydra" which the children played in the first season of Stranger Things.

Netflix and BonusXP have developed a free mobile game for Stranger Things. To create the effects of the '80s, the game uses a retro-pixel style of art, similar to games for the Nintendo Entertainment System. It has also been styled along the lines of the 1986 title The Legend of Zelda. The game was downloaded 3 million times in its first week.

With the release of season two, the game was updated and released for the Amazon Fire TV. It was nominated for "Mobile Game" at the 14th British Academy Games Awards. A second mobile game titled Stranger Things 3: The Game has been released along with the third season.

Lego has introduced a Stranger Things set called "The Upside Down", based on the Byers' home. The first official Stranger Things novel titled Suspicious Minds was released earlier this year.