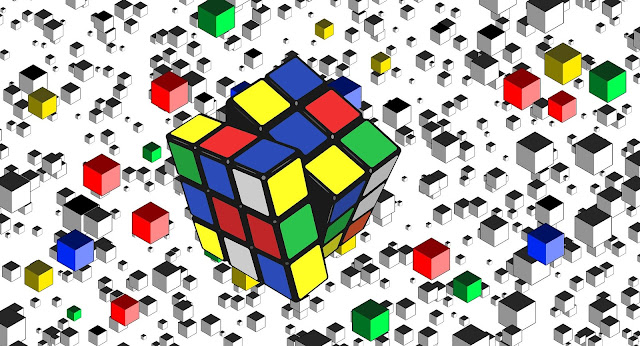 In January 1980, Ernő Rubik's "Magic Cube" would be unveiled at London Toy Fair. 40 years later, the Rubik's Cube is widely considered to be the best-selling toy of all time.

Rubik's invention was patented in Hungary four years prior in 1976 with the first test batches sold in Budapest toy shops the following year. It wasn't until 1979 at the Nuremberg Toy Fair in Germany that American toy manufacturer Ideal Toys took notice of the cube and eventually struck a deal later that year to produce it worldwide. The "Magic Cube" name was changed to "Rubik's Cube" after its inventor and would make it's global debut in early 1980 at toys fairs in England, France, Germany, and the United States.

By May 1980, the initial cubes began hitting toy shelves with modest sales numbers. And then came a $1.5 million advertising campaign from Ideal Toys on television and in newspapers... 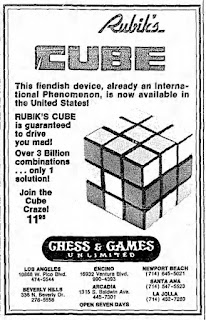 "Win a $50 gift certificate. Just solve one side of Rubik's Cube in 3 minutes or less." That would be enough to get me in the store and apparently it worked as sales exploded and Rubik's Cube would be named 1980 Toy of the Year in several countries.


It's estimated that 200 million cubes were sold from 1980-83. Speed solving contest popped up worldwide including one in 1981 organized by the Guinness Book of World Records in Munich, Germany. By 1983, the popularity had grown to include an animated series Rubik, The Amazing Cube. Knock-off toys began flooding the market and new puzzles would be released like Rubik's Magic and Missing Link.

Eventually, the Rubik craze would diminish in the latter part of the decade, but it has never completed faded. Rubik's original patent expired in 2000 which brought a new revival of other branded cubes especially in China. In 2003, the first speedcubing championship was held since 1982 in Toronto, Canada. By 2008, sales reached 15 million worldwide and YouTube videos renewed interest in solving the cube. Even today, you can still find Rubik's Cube on store shelves.

While it's been 40 years since most of us first experienced Rubik's Cube, the puzzle remains etched in our brains as the quintessential toy of the '80s. Continue the conversation by leaving a comment below with your first memories of Rubik's Cube.