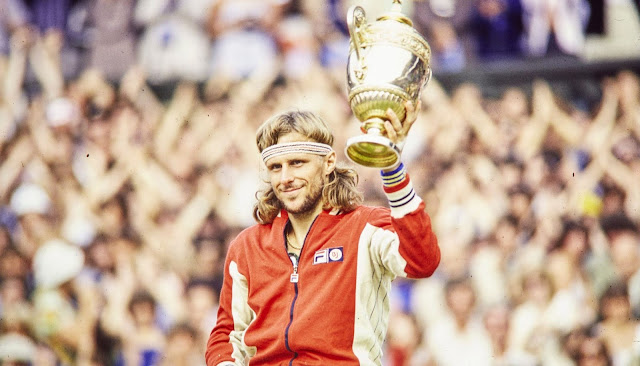 The '80s were really the first decade in history in which sports and fashion began to merge and form a bond that would last till the present day.

Whether it was newly minted tennis players sporting headbands and shorts, or unruly soccer stars turning up to nightclubs in the sort of attire that made Hollywood actors blush, it was a decade that turned big business onto just how profitable athletes and sports teams could be when used as clothes horses and brand ambassadors.

Here are just some of the men from the late '70s , through the '80s, and early '90s era who with a little help from fashion industry gurus, turned themselves into fashion icons that still shape the way the industry thinks and works to this very day.

Borg was one of the most gifted tennis players ever to pick up a wooden racket and was wildly successful on the court throughout the second half of the seventies and the early '80s, eventually retiring early to focus on his playboy lifestyle.

Indeed it was his cavalier attitude to a sport that became evermore professionalized and serious by the day that won him many admirers. Many of the game’s modern fanbase often bemoan the lack of such characters, who are too often superseded by robots like Nadal, Djokovic, and Federer, more interested in PC and PR friendly soundbites rather displaying any kind of genuine charisma. Nevertheless, this approach does, of course, make them something of a shoo-in for punters looking to use a treasured free bet on an upcoming grand slam or ATP event.

Part of Borg’s allure was his unique fashion sense, which paired tight figure-hugging shorts with wild unkempt blonde hair, typically held in place by a sweatband. He looked effortlessly cool and knew it, carrying the look off infinitely better than counterparts such as John McEnroe, who resembled more of an angry chemistry teacher than a debonair tennis cad.

In true rock and roll style, Borg’s comeback later in the '80s floundered as his partying caught up to him. He then followed this up by frittering away much of his fortune by lavishing himself and guests with expensive nights out in Monte Carlo. This led him to have to auction off much of his memorabilia and career mementos to cover his debts. This cause was also helped by the ex-player's latest foray into the fashion world, with his wonderful underwear range.

If you have ever visited the Netherlands or Barcelona you will know just how highly regarded the Dutch maestro Johan Cruyff was for his footballing ability, but it was his eye for fashion which really propelled him to another level in the mainstream conscious.

Although his golden years as a player took place in the '70s he was still active in the '80s as well, eventually going on to manage the Barcelona team where he first nurtured a young Pep Guardiola (another player/manager who knows a thing or two about how to pick out a stylish sweater and trouser combo).

Cruyff was a one-off in the fact that he paired a wacky off-field personality and wardrobe with a naturally unique playing style and floppy hairdo.

He tragically passed away in 2016 in his beloved adopted city of Barcelona, where he still made a hash of blending Catalan and Spanish languages when he gave interviews. His legacy partly lives on through his own fashion brand.

These days when you mention "The Fab Five" most people think of the Queer Eye team, and with good reason, because it’s amazing, but of course the original Fab Five were a collegiate basketball team in the early '90s who redefined their sport forever by introducing a unique clothing like black socks and playing style that was immediately emulated by kids on the court.

Today’s biggest NBA stars all acknowledge the style and content that Chris Webber, Jalen Rose, Juwan Howard, Jimmy King, and Ray Jackson brought to the game of basketball, blazing a trail that others have followed ever since.

In many ways Botham was ahead of his time, playing the game of cricket much like the English cricket stars that would follow him in later decades such as Freddy Flintoff and Kevin Peterson.

His bravado and blind confidence had the likes of the Australians shook every time he took to the field and his pugnacious playing style was backed up by a mean mullet and a scruffy demeanor that had village cricketers up and down the land copying his look.

In his later years, he has conformed somewhat but still has that twinkle in his eye that when combined with a sharp suit brings back memories of the bat-wielding, curly mullet brandishing, mustache sporting, all-rounder.

Before Alex Higgins came on the scene, snooker was seen as a slow and unexciting sport tantamount to lawn bowls or darts, but when he was done the game had changed beyond all recognition into a national and even global phenomenon.

Known as Hurricane Higgins, the Northern Irish player was renowned for playing the game at a whirlwind speed which often had television and live arena audiences gasping, as he made century breaks with a swagger and aggression the likes of which had never been seen before.

He did all this while sporting sleek waistcoats and well-tailored trousers, all paired with some select pieces of jewelry to complete the look.

Like all sporting geniuses, he was flawed; his achievements overshadowed by that of his peers such as Steve Davis, but despite this, he won the World Championship twice and inspired the likes of Ronnie ‘The Rocket’ O’Sullivan to keep the game young, interesting, and above all, stylish.
Newer
Older
Powered by