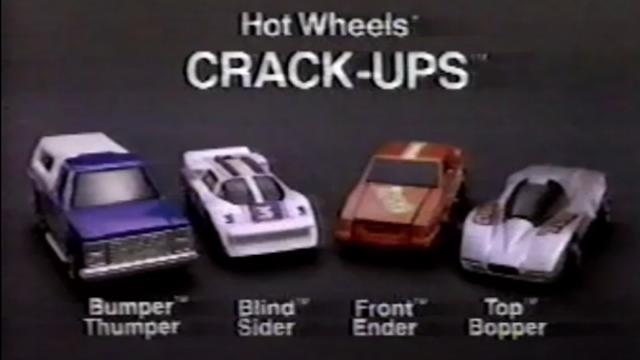 On the The Retro Network this week, Mickey and I discussed five of our favorite toy commercials from back in the day on TRN Podcast 055. Of course, all of my choices were from my childhood era in the '80s and thought I'd share them here with some memories.

Toy commercials back in the '80s did so many things right to appeal to us kids. Some added animation either as an introduction or mixed it with live-action segments to bring characters to life. (Also see my best animated video game commercials list.) Toy commercials also had the best play areas to showcase kids with the featured toy in action. The backdrops were so perfect that we could never duplicate in our own backyards even though we tried. Another marketing ploy was adding a futuristic element that made the toy seem like it came from some distant planet in outer space made by super intelligent alien beings. Finally, having a catchy jingle in the commercial never hurt because my brain still seems to be clogged with them.

Here are the five commercials I chose during the podcast which all feature at least one of the market ploys I mentioned above...

Hot Wheels cars that show damage! I simply had to have these for my playtime. My neighborhood friend and I would always combine our collections when we got together and draft cars one at a time to use during play. The "junksters" seem to be our most coveted cars and when Hot Wheels Crack Ups came along, they ascended to top of the heap. If He-Man could have battle damage then surely it was perfect for Hot Wheels. The commercial elegantly showcased the cars in action and how the damage action worked. And the kid's little ditties about "Bash 'em in the back, Jack!" and "Drop 'em off a cliff, Biff!" were engraved in my mind to the point where I had to have Crack-Ups in my collection.

I guess you can classify this as a "toy" because it was meant for kids. I had a Slip'n Slide growing up and it was my main means of cooling off in the summer time. Slip'n Slide had the catchy "Sliiiiiiiip! Slip'n Slide!" jingle but when Crocodile Mile came along, it was a whole other animal. If I had to guess, Steve Irwin built his empire on this TV commercial featuring an Australian announcer and live crocodiles. Plus it had the catchy jingle "You run, you slide, you hit the bump, and take a dive!" And if that wasn't enough, a few years after it was initially released, they revamped the commercial to included an animated crocodile swallowing a kid slider! I never did get to experience the speed bump and splash down pool that was Crocodile Mile, but I surely wanted it thanks to the commercial.

"CROSSFIRE! Don't get caught in the...CROSSFIRE!" With players zooming in on what appeared to be hoverboards and battling in a some kind of post-apocalyptic arena, the commercial for the tabletop game Crossfire was something conceived after watching a drive-in movie marathon. A friend of mine had the game and we played it as intently as the kids in the commercial. Like Crocodile Mile, Crossfire also revamped the commercial in the '90s into what could've been an adolescent film sequel to Rambo. Crossfire is still available at Target and I actually gifted one to myself at Christmas last year. Didn't have quite the luster as it did when I was a kid, but the old commercial still held enough influence on me to pick it up when I saw it on the shelf.

It was common knowledge when I was a kid that "Hills is where the toys are." Growing up in rural PA, I was a good 45 minutes away from a Hills department store. When we did make the trip to State College, PA to visit Hills, I'm sure my mother was ready to ship me to Abu Dhabi from singing that jingle throughout the duration of the car trip. The most memorable commercials to me were around Christmastime and starred a little elf who would showcase the new toys at Hills. This commercial in the later '80s featuring G.I. Joe figures and vehicles culminated with the elf amid a forest of boxes. Even now, I dream of being amid new-in-box G.I. Joe toys and this commercial communicated to my adolescent self that Hills was the only place on Earth that could make that dream a reality.

REAL M.A.S.K. VEHICLES EXIST!!! Yes, once series two of M.A.S.K. toys hit shelves, the toy commercials were revamped to include live-action segments at the beginning. They featured actors wearing their corresponding M.A.S.K. characters' uniforms and helmets along with life-sized replicas of the toy vehicles! That was mind-blowing to me as a kid. For my 10th birthday, I received the Hurricane vehicle and was so revered that I still have it to this day. I'm not sure I realized the commercials were just using "props" but the fact that I might have a chance to drive past a real-life Hurricane pushed M.A.S.K. to the top of my toy heap. The commercials also featured some great playtime setup with multi-level tiers of dirt roads and rocks for the lucky buggers who got to play with them.

If you want to dive further down the toy commercial rabbit hole, check out the TRN Podcast 055 playlist on YouTube which features all of the picks from Mickey, myself, and our feedback army on Twitter.