5 Forgotten Toys From the 1988 Toys R Us Christmas Flyer 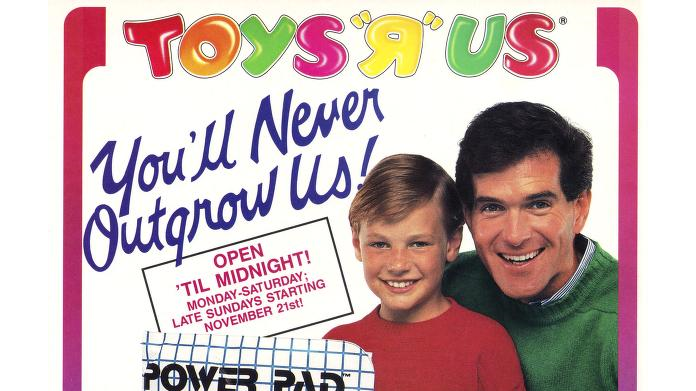 This week on TRN Podcast 069, Mickey and I browsed the 16-page Toys R' Us Christmas Flyer from 1988. While we have fond memories of the Sears Wishbook (which we'll be covering next month), these toy flyers that came in the local newspaper or were available at the actual store are full of nostalgia.

As a supplement to the podcast, Mickey and I are both delving further into some of the individual pages. Read about five of Mickey's favorite toys from the flyer over at Retro Ramblings and below you'll find five toys that escaped my brain from the broad toy landscape of the '80s. (Click the links in the article to watch commercials on YouTube.) 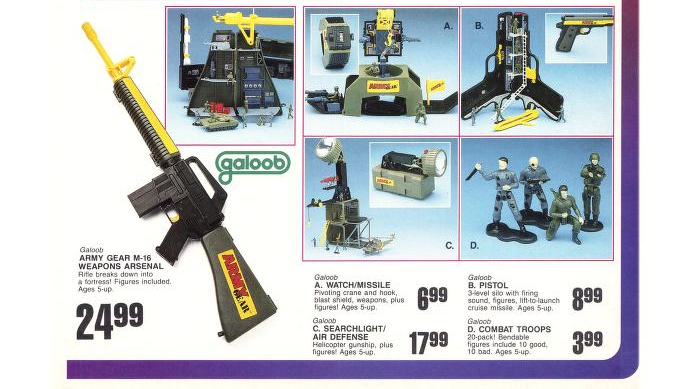 Galoob was the company that brought us Micro Machines beginning in 1987. The small cars and elaborate fold-out playsets were very sought after in the late '80s through the early '90s. What I had not remembered was their Army Gear toyline! These military roleplay toys featuring rifles, pistols, grenades, flashlights, canteens, and more each transformed into a micro playset with action figures. I'm surprised I had not remember these as me and my neighborhood friends were big into G.I. Joe both in toys and in roleplay. These toys are the best of both worlds. 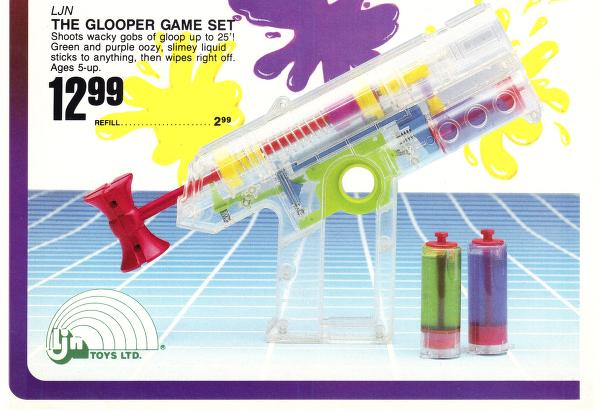 The Glooper gun by LJN was actually branded under Entertech which I mainly remember for their realistic water guns. I do not remember the Glooper which essentially shot safe, non toxic slime via preloaded shells. While I can believe it could easily be wiped off solid surfaces, I highly doubt that any mom would've been happy to see it on their kid's clothes (as portrayed in the commercial.) 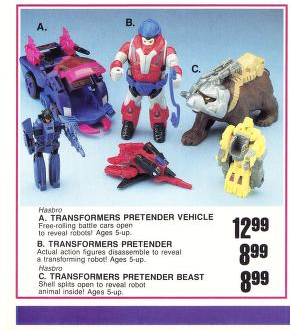 While I loved watching The Transformers animated series growing, I did not have many of the toys. I actually collect more Go-Bots which makes me surprised that I did not remember Transformers Pretenders toys. Hidden inside larger figures, vehicles, and beasts were classic Transformers characters like Bumblebee, Jazz, and Starscream. That's right, disguised robots in disguised. Overkill? Maybe but the smaller size and price point should've meant owning a couple of these in my childhood. 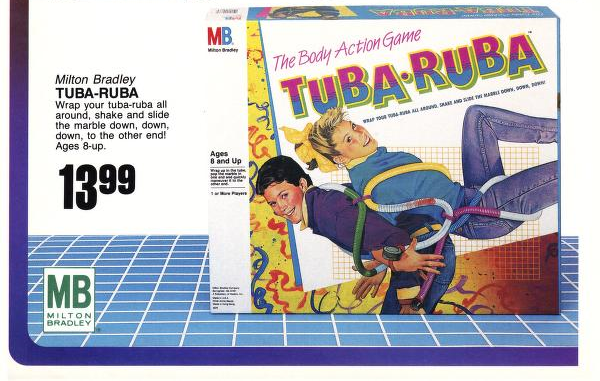 I was an only child so most the party games like Twister I hardly ever played. The "body action" game Tuba-Ruba was one I had not remembered which featured flexible tubes that you wrapped around your body and then move in such a way as to make a marble go from one end to the other. This commercial shows it mainly as a one-player game while the box cover shows a little more intimate setting that you could perhaps play with your childhood crush. 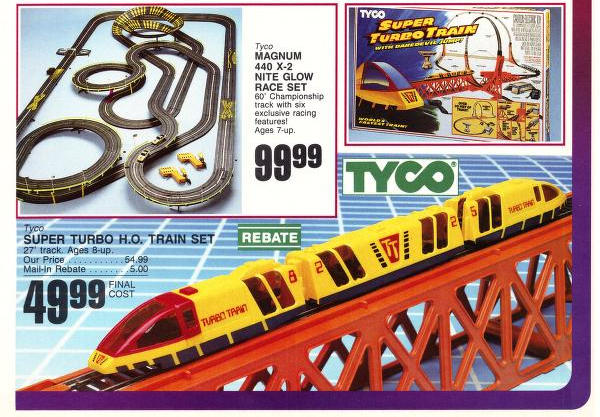 I was aware of the Super Turbo Train by Tyco (of course) but had not not remembered the "Daredevil Jump!" I never had a model train or even a decent slot car track growing up so I was always enamored with Tyco's sets in the Sears Wishbook. I had remembered the Super Turbo Train as being billed as the fastest train in the world but forgot that it both scaled walls and performed a jump!

The full 16-page 1988 Toys R' Us Christmas Flyer is available at the Internet Archive and each page is also posted as a Twitter thread on The Retro Network profile. We invite you to listen to the podcast below and leave your reactions.