Now and Then: Ten Things We Never Would Have Thought Possible Back In The '80s

Posted atDecember 19, 2021Posted by:RD80s StaffLabels#1980s, #80s, #Pop Culture, #Technology Post a Comment
Share
Back in the 1980s, hair was big. Shoulder pads were big. And thanks to the release of Back to the Future Part II, all our hopes for the coming decades were pinned on the invention of hoverboards. We are still waiting expectantly for hoverboards…but in so many other ways, our current existence would seem, to our 1980s ancestors, a science fiction fantasy world of instant communication with endless television channels and computers that fit in the palm of our hands.

Computing and the Internet

In the early 1980s, Atari was the summit of home entertainment tech and the thought of every household having a personal computer seemed as realistic as every house owning a spaceship. Information and Technology only began to be formally featured in the school curriculum in the nineties.

Even trying to explain Facebook to a resident of the 1980s would be near impossible. This was a time when we had to wait for a phone call, rather than checking someone’s ‘active’ status on Whatsapp every five minutes and looking to see if they’ve recently posted to Instagram.
Social media has resulted in instant connections and instant communication - both indirectly and directly. We can now easily catch up with friends on a group chat, rather than waiting for the third Friday of the month to meet at the discotheque held in the village hall.
The liking part would be unfathomable to a 1980s citizen. But then, it is to me, too.

How Quickly Things Can Get Done

Largely, as a result of our new digital world, back in the 1980s, no one would have thought the speed that stuff gets done now possible. For example, your kettle breaks - you can use an online next-day delivery service so that the new appliance is there ready for your morning coffee or tea. If we want to book a holiday, we just hop on the internet, browse the choices, and pay online; there’s no need to take a trip to town to visit a travel agency and scour through reams of possible vacations.
We can keep our homes in good repair and insulated more effectively than ever before. If you want a tradesman to quote, he may be able to offer you a virtual consultation that very day. Looking for replacement windows? A quick internet search will give you all your options, and if you happen to be, click here to find out more, as well as providing advice on what you should look out for and the price you can expect to pay.

Our ever-increasing ability to grow organs using stem cells would have seemed well in the realm of science-fiction back in the 1980s. Scientists recently successfully grew the inner cellular structure of the fallopian tube, and mini versions of the heart, kidneys, and lungs have also been created in a lab. A working esophagus has been grown on a framework by scientists in Russia that was successfully transplanted into a rat.

The advances in these fields, over the last two decades especially, have been nothing short of extraordinary. With robotics and automation now employed, to a lesser or greater extent, in almost every industry in existence, the face of the modern workforce has changed with machines increasingly able to undertake the tasks previously assigned to a human worker.

Closely linked to robotics and automation, artificial intelligence (which comprises machine learning) is taking bounds forward at speed. Back in the 1980s, the movie Bladerunner informed the popular idea of what AI would look like; human replicants who had been engineered to not form a personality or be able to exercise self-governance. The reality of the development of artificial intelligence, however, has been very different: its application today is in any field where processes can be optimized; it is used widely, for example, in programming and analysis.

No one that I knew in the 1980s had any idea that such a thing as an ozone layer existed, let alone that it had a hole in it. The 1980s weren’t known as the decade of sustainability, but the seed of awareness that was planted during this time, upon the discovery of the hole, made many people make some switches to try to help - such as eliminating CFC spray products from their beauty regimes. But if you’d have suggested to my dad in the 1980s that he put the leftover chicken carcass in a food waste bin, he probably would have asked you to leave.

How Important a Phone Could Be 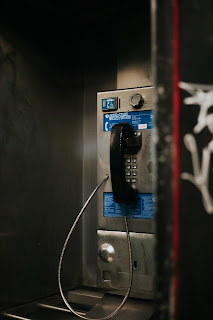 Explaining the place that cell phones hold in the individual’s life now would be an impossible task. Phones in the ‘80s were brick-sized devices that needed to be attached to the wall (well, the wires within it) to function. You couldn’t take a photo with one, you couldn’t use it to message your friend to ask her to bring over her Jason Donovan poster, and you certainly couldn’t swipe right with it.

Back in the 1980s, you could pay with cash, card, or cheque. But paying with a card involved a printed receipt and the need for you to put your actual real-life signature on it before being given a copy. Even stranger, forty years ago, it didn’t even matter if you had no money in your bank account but wanted to buy a cassette: you could write a cheque, a nifty little promissory note that took three days to clear with your bank, buying you a few days before you needed to top up funds.