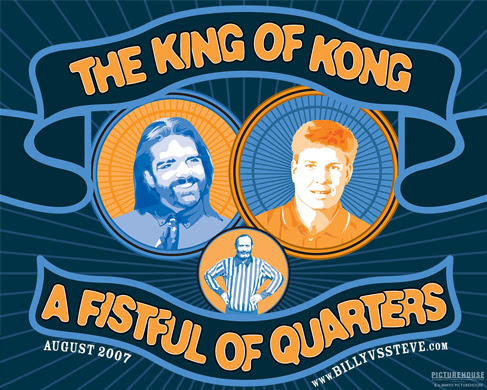 For those of you who remember battling your friends for the high score at the arcade in the 1980s, I highly recommend you watch the film King of Kong: A Fistful of Quarters. I've watched it many times and it's one of my favorite documentary films. It's the story of Steve Wiebe's quest to beat the Billy Mitchell's long-standing high score on the arcade game Donkey Kong.

For me, the film really conjures up some great memories as a kid, playing arcade games at the roller skating rink and the mall. The film is a Rocky story of sorts as Steve stumbles his way into competitive arcade gaming and decides to challenge the Mt Everest of records. To further stress how good this film is, Rotten Tomatoes website has it listed as 97% "fresh" and a 93% audience "liked it" rating. Put it in your Netflix queue...it's well worth the watch! Watch it below through Hulu...