The Rise and Fall of the Garbage Pail Kids 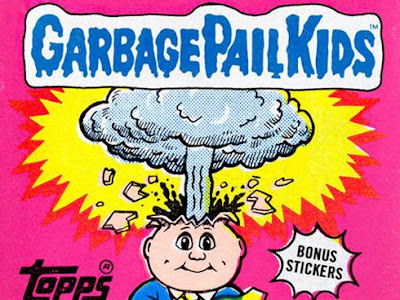 The Rise and Fall of the Garbage Pail Kids

10 years prior to the Pokemon frenzy in the late 1990s, the Garbage Pail Kids ruled the trading card world. In 1984, Cabbage Patch Kids dolls were highly popular in toy stores. In that year alone, 20 million dolls were sold worldwide! The Topps Trading Co decided to use the popularity of the dolls to create a parody line of trading cards. Using cartoonist Art Spiegelman's concepts, the first series of Garbage Pail Kids sticker cards were released in 1985. The gross-out and toilet humor themed cards were an immediate hit among boys, which had left collecting Cabbage Patch Kids dolls to the girls. Also, for boys who weren't in to collecting sports related cards, GPK cards gave them an outlet to collect.

Real people names were used on the cards, so there was practically a card that related to everyone. (Find your name on Wayne's Garbage Pail Kids References website) In that initial year, two sets of cards were released in the United States with over 80 different characters is each set. GPK cards would also become popular in other countries like Canada, United Kingdom, and Holland. For young boys, they were humorous and fun to collect or put in stickers books. To parents, they were crude, disgusting and repulsive. To teachers, they were a distraction, which were banned from many classrooms. Despite the adult rejection, GPK remained popular and four more series of cards were released in 1986. But production was halted for a brief time that year, as Cabbage Patch Kids maker Coleco sued Topps over copyright infringement. A judge order the cards to cease production during deliberation. A settlement was made out of court and Topps agreed to change the GPK logo and resemblance to the Cabbage Patch Kid dolls.

In 1987, five sets of cards were produced and a live action movie was released to movie theaters in the late summer. The movie is widely regarded as one of the worst ever made. RottenTomatoes.Com gives the film a 0% rating and IMDB.Com users give it a 2.7 out of 10 stars. It was also a financial failure, making just $1.5 million at the box office on a $30 million budget. A GPK cartoon was also produced in 1987 by CBS television network, but was removed from the fall scheduled. The 13 episodes never aired in the US and it wasn't until 2006 that Paramount Home Entertainment released Garbage Pail Kids - The Complete Series

to DVD. On the heels of the movie flop, four more sets of cards were still released in 1998. But by the end of the year, card sales dwindled and the planned 16th series of cards was never released. Topps has continued to produce new and flashback releases of the cards over the last 13 years and they still remain active today.

Looking back, I remember collecting a few GPK cards along with my sports card collection. I don't remember my parents banning them or getting upset over them, but I never really collected enough for it to become an issue. As a parent now, it's very hard to imagine a time when kids collected cards of baby-type figures smoking cigarettes, drinking beer, and bludgeoning themselves. I don't think anyone ever died because they tried to imitate the figures on the cards, but it was probably a good thing that their widespread popularity spanned only 3 years before they could get to the demonic ritual series. But we, the children of the 80s, will still remember them as part of our childhood. Here is Cracked.Com's take on the remembering the franchise: 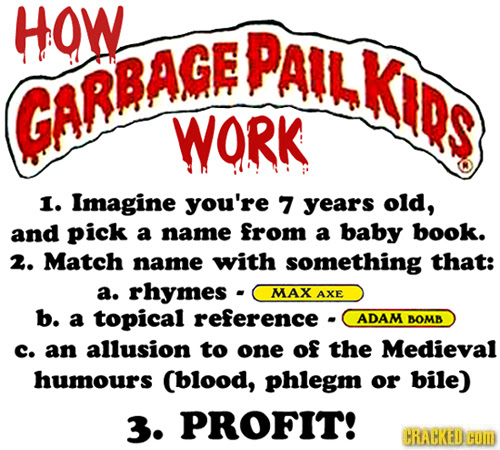