Pole Position, the grandfather of modern racing games, was a must-play at the 80s arcade. It had everything you needed to feel like you were behind the wheel of a Formula 1 racecar...the steering wheel, the gas pedal, the low-high gear shifter, the high speed crashes! It truly was a slot machine for 9 year olds that paid off every time. But I also remember playing during my high school years in the early 90s, even though it was introduced ten years earlier. A good friend and I frequented a hole-in-the-wall burger and ice cream shop that had an attached game room. It had all old school arcade and pinball games. (The pool table was even 50 cents per game.) Pole Position was one of the games and it was always one that we played every time we visited. Even after playing over many years, it still had what I call "initials quality," meaning that getting your three initials on the high score screen was still meaningful.

Pole Position was released in Japan by Namco in 1982. They approached two gaming companies in the United States, Bally Midway and Atari, Inc to produce either Mappy or Pole Position. After Bally Midway chose Mappy, Atari produced Pole Position, which turned out to be a fortunate circumstance. Even though it wasn't the first to have the 3rd person "look from behind" gameplay (Turbo by Sega in 1981), the driving simulator quickly became the most popular game on the planet in 1983. Atari not only released an upright model but also a "cabinet" or cockpit style model that included a brake pedal! Though the game play was primarily the same, the beautiful racing scenes on the outside and automobile-like feeling on the inside combined for an awesome experience.

To say that Pole Position's gameplay was ahead of its time is really an understatement. It was the first racing game to feature a qualifying lap before the actual race took place. The better the qualifying lap you had (if you could complete it), the better your starting position in the race. Combine that with the time limit, the AI cars, and the course being based on a real racetrack, Pole Position had the blueprint for many racing games to come.

Pole Position has one sequel by name, Pole Position II in 1983, which was similar to the original but with 3 additional racing courses. Many consider Atari's TX-1 in 1984 to be the third installment, primarily based on the similarities, but it was never officially classified as a sequel. That same year, Pole Position had become so popular that DIC Entertainment produce a Pole Position cartoon. Only 13 episodes were ever produced, even though it did make a comeback in reruns in 1986. The official third installment to the arcade game was Final Lap released in 1987. It became the first arcade game to offer a networked multi-cabinet, multi-player gaming experience. That is, two players could sit at one game and also be linked to 3 other cabinet machines, offering up to an 8 player race. (Amazing to think that was possible almost 25 years ago!) Final Lap would spawn three more sequels, ending Namco's F1 racing arcade game series in 1993. 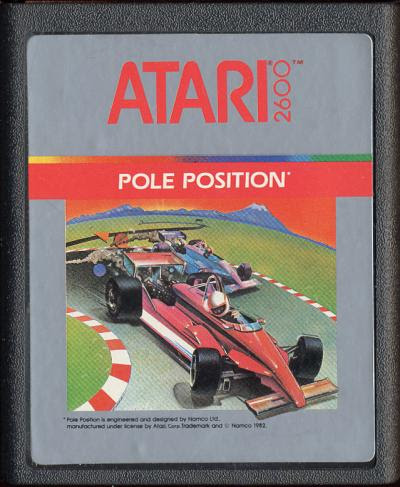 Atari also released Pole Position to its 2600 console gaming system in 1983. Most people would agree it was a tough transition without the steering wheel and gas pedal experience of the arcade version. I believe it was an important one though, seeing the success of modern day racing franchises like Project Gotham Racing and Gran Turismo. Pole Position's transition to a console based game could have been the first baby step in shifting the popularity of playing video games at the arcade versus at home. But those of us who grew up in the 80s, and even earlier, are lucky to have first hand knowledge of what is was like to first experience our favorite games in the arcade. That is the lasting childhood memory of Pole Position that I am grateful for experiencing.

Thanks as always to Arcade-museum.com and Wikipedia.
Newer
Older