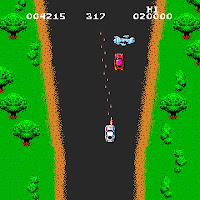 Spy Hunter is definitely in my top ten favorites of all time. It combined elements of the James Bond films, the Pole Position arcade game, and the TV show Knight Rider into what would be an 80s classic. Though it does not have a very successful legacy, Spy Hunter made a big impact when it was first released on quarter-spending kids such as myself. The game was encompassed around a white sports car that could transform into a speedboat and had defensive mechanisms such as oil slick and machine guns. It was then your job to drive this awesome piece of machinery and to protect the streets against various enemy vehicles. That basic premise led to sequel games and almost a movie starring Dwayne "The Rock" Johnson. Let's take a look back at how Spy Hunter became a favorite at the 80s arcade.

Spy hunter is a vertically scrolling driving game that was released by Bally Midway in 1983. It's controls were similar to that of 1982's driving icon Pole Position with a steering wheel, gas pedal, and a low/high gear shifter. The steering wheel was not your tradition style but more like airplane controls with two thumb firing buttons and two triggers on each handle. These buttons controlled the special weapons for your high advanced spy vehicle, including machine guns, smoke screen, oil slick, and missiles. You gained these weapons by driving into the back of a tractor trailer ala Knight Rider. Once the weapons van had you ready to unleash hell on the streets, it was your job o maneuver the "G-6155 Interceptor" to disable enemy vehicles. And if that wasn't enough, your journey was serenaded by Henry Mancini's famous Peter Gunn theme.

There were many enemies in your quest for highway domination, including a bulletproof car, a tire slashing car with protruding spikes, and a passenger in a limo with his sites set on you. If that wasn't enough, a helicopter armed with bombs would find you and create car-sized potholes in the road. Managing to survive for awhile in this death race and you could witness your car turn into a speed boat and take to the water! Survival was really the ultimate object of the game. Spy Hunter came in an upright standard cabinet model and also a sit down model. Prototypes used the James Bond theme, but the rights could not be obtained and was changed to the Peter Gunn theme for production models. In 1984, Bally Midway built on Spy Hunter's popularity by releasing a Spy Hunter pinball machine. This game is now a very rare find for pinball enthusiasts.

1987 brought the next chapter in Spy Hunter history with the arcade release of Spy Hunter II. It featured a similar setup but with dual controls for a multiplayer game. Most people would consider the sequel a major flop. It was not well received and never went into large scale production. Spy Hunter was also released to the Nintendo Entertainment System that same year, providing a great adaptation of the original arcade game. In 1991, Sunsoft also released Super Spy Hunter for NES. The game was actually not originally designed as a Spy Hunter sequel, but Bally Midway released the rights and allowed it to be marketed as such. In 2001, Midway developed what I thought was a great updated version of Spy Hunter for all major game consoles. It included some great new weapons and features, including a new motorcycle version of the Interceptor. Spy Hunter 2 was released two years later in 2003 including a new plot and theme song by Vanessa Carlton.

From 2003-2005, anticipation arose for production of a Spy Hunter film, to be released with a new video game called Spy Hunter: Nowhere To Run. Dwayne 'The Rock" Johnson was cast as the lead in both. The film never began main production due to script rewrites and time constraints by directors. Eventually Johnson left the project as well. The video game was released in 2006 featuring the first time that the agent and car could be controlled during gameplay. Even though the franchise was perhaps not as successful as others, Spy Hunter is still revered as one of the top 100 arcade games by the Killer List of Video Games. I leave you with perhaps one of my favorite TV commercials of all time. In 2008, Pontiac used Spy Hunter as the premise for it's new G8 sports car ad. I thought it was a great salute to the legacy of the franchise and its potential that was really never fully reached.

Thanks as always to Arcade-museum.com
Newer
Older