Advertising Pitch Men In The '80s 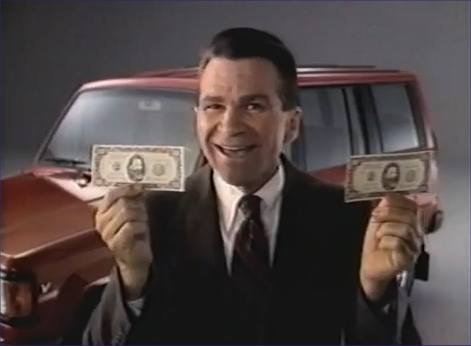 The '80s were full of some colorful characters...even in commercials. Some of the pitch men were hired based on their popularity or celebrity. Other pitch men are forever linked to their brand and became more infamous. There were also a few diamonds in the rough, who got their start in television ads and went on to become more famous. Let's rediscover some classic advertising pitch men in the '80s.

Bartles & Jaymes
In 1981, E & J Gallo Winery gave us Bartles & Jaymes wine coolers and malt beverages. But it wasn't until three years later that "Frank Bartles" and "Ed Jaymes" started appearing in commercials. The two actors who portrayed them, David Joseph Rufkahr and Dick Maugg had no previous acting experience, but it worked well with the simple "down home" style of the ads. The two pitch men were based on the men who began the original winery. The ads became widely recognize and always included the famous catchphrase "...and thank you for your support."

Joe Isuzu
Easily the biggest liar of the decade, Joe Isuzu loved to make outrageous claims on how Isuzu could save you money. Sometimes he'd even through in a "free" dental plan or a "free" chauffeur...given that you paid for  them yourself. The actor David Leisure used his Joe Isuzu popularity to land a role on the long running sit-com Empty Nest in 1988. More recently, he's had roles on the daytime soap operas The Young and the Restless and Days of Our Lives. As far as Joe Isuzu, he reached the Mount Everest of platforms by appearing in ads for Super Bowl XXI. From 1999-2001, he was briefly resurrected. His famous taglines include his signature "Hi" at the beginning of the ad and also his famous end line of "you have my word on it."

Ernest P. Worrell for Mello Yello
The brain child of the Carden and Cherry advertising agency in Nashville, TN, Ernest made his first appearance in a 1980. The simplicity of his interaction with his buddy Vern became popular and was soon doing different variations of the same commercial for new clients of the ad agency (sometimes as many as 25!) Ernest was hired by the Coca Cola company in the early 80s to promote its Sprite, Mello Yello, and Tab soft drinks. Jim Varney would reprise the role of Ernest in many feature films until his death in 2000, the first being Ernest Goes To Camp in 1987. His work was never complete without his signature "KnowutImean?" tagline.

Bill Bixby for Radio Shack
Banking on the popularity of the Incredible Hulk television series from 1978-1982, Radio Shack hired actor Bill Bixby to pitch their Tandy computers. His tenure included such models as the TRS 80 and the TRS 2000 which was released in 1983. Although he never really had a catchphrase for the ads, most viewers didn't need one as they probably bought his computers, just to not "make him angry."

Paul Hogan for Fosters
Was there ever a more perfect fit for a pitch man? Paul Hogan aka Crocodile Dundee was the long time pitch man for Foster's lager in the 80s. He appeared in numerous ads for many different countries including the UK, Canada, and the US. He would continue to promote Foster's in the late 80s as well, during his rising fame as a movie star. He also didn't have much of a catch phrase, but most of his ads featured his "fish out of water" humor with him being in high society environments colliding with his Ausie bushman crass.

John Mischotta, Jr for FedEx/Micro Machines
John Mischotta is known throughout the 80s and 90s for his work in television commercials. His first notable  ad was his 1981 commercial for Fed Ex, for which he was hired after appearing on the show That's Incrdible for his fast talking abilities. He would later star in over 100 commercials as the Micro Machine man, pitching the tiny cars to kids everywhere and reminding them "if it doesn't say Micro Machines, it's not the real thing." He would also appear in countless other national commercials and television shows for his amazing talent.

Mark Harmon for Coors
Before Agent Gibbs of NCIS got his badge, he was tapping the Rockies for Coors beer. In the mid 80s, when Harmon was People magazine's sexiest man alive, Coors profited from his forthcoming and all-American style. His first appearance as a pitch man was with his dad, also a longtime pitch man, in a commercial for Kellogg's 19 cereal in the 70s. After landing several television roles including Dr. Robert Caldwell on St. Elsewhere, Harmon would be hired by Coors to convey that "Coors is the one."

Jack Black for Pitfall
Long before Tenacious D and Kung Fu Panda, Jack Black was promoting the Activision game Pitfall for the Atari 2600 video game console. This was his earliest TV appearance at the age of 13.
Newer
Older
Powered by