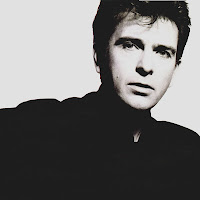 His biggest hit came from his 1986 album So. "Sledgehammer" would peak at #1 on the US Billboard charts and its music video has been declared MTV's most played video of all time. It was also win a record 9 MTV Video Music Awards in 1987.


There were some notable 80s bass guitar players born on this day too!

Peter is a founding member of British new wave band New Order. He played with the band through 2007. Another band with great success abroad but mainly just on the dance charts in the US. Known mainly for their hit "Blue Monday," the single "True Faith" was actually their highest charting hit in the US during the 80s.

Tony is a founding member of Big Country and continues to tour with the band. Although Big Country's success has been primarily in the UK and their native Scotland, the top 15 hit "In A Big Country" remains an 80s favorite in the US.