The Worst Super Bowl Commercials of the '80s 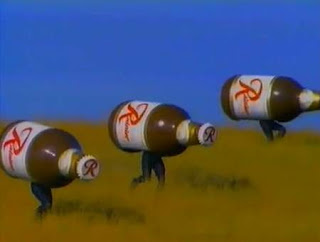 The Worst Superbowl Commercials of the '80s

Having made known my choices for the best Superbowl commercials of the '80s, now it's time to take a look back at those that make us wonder..."They paid millions of dollars to show this???" Now, I understand the ploy of marketing companies across the world is to use anything and everything to get our attention for 30 seconds. Breaking out in song, the use of 3D glasses and a well-placed orangutan have all seemed to be Superbowl ad trends at one time or another. But the commercials I'm about to present, seem better placed on the Muppett Show, an after-school movie, or a safety training video. Here are the worst Superbowl commercials of the 80s in my humble opinion.

Okay, so let me get this straight...Miller Lite taste great, has less calories than other beers, and can calm the craziest of coaches, John Madden. That sounds like a good plan and all, but it would have been better if he had lasted the entire commercial without screaming at us! If they had tamed Madden for the entire commercial, I think the point would have been made. But I imagine most people who were annoyed by Madden (throughout his many ad pitches of the '80s) still thought it was worth getting up out of their easy chairs, walking up to the television, and turning the channel knob when his crazy mug came on during the game.

Rainier Beer "A Brew Apart" (1981)
I believe this is why Rainier Beer went out of business in 1999...not that the beer wasn't selling or a good product, but that people couldn't get the stupid image of a beer bottle with legs traipsing the mountains of the pacific northwest out of their heads! This ad reminds me of the show Finding Bigfoot, as if finding this lost mutated beer bottle will be the discovery of the century and lead to pure, crisp, clean refreshment. If Rainier makes a comeback, will someone please tell them that scantily clad girls and people actually drinking their beer are a good start to a new marketing campaign.

Apple "Lemmings" (1985)
Most people would admit that Apple knocked one out of the park with the "1984" ad. But the following year, the "don't take a pee during the 4th quarter" ploy had many people wishing they hadn't damaged their kidneys for this 30 second freak show. Apple used the same "break the mold" message as the year before, but took it a "step" further with blindfolded people falling off a ledge. I'm sure there were many people who thought "I pissed myself for a bunch of whistling, suicidal morons?" I think Apple's first mistake, was the hype. The year before there was no hype and the ad just struck a chord with many people. You can't hype up something and expect to get the same effect from a similar ad. Plus, most people took offense to the fact that they were essentially insulting the work force. The ad was such a failure that Apple would not air another Superbowl ad for 14 years.

Call me crazy, ("YOU'RE CRAZY!!") but was Budweiser pitching their product to dogs? I mean, they did everything in this commercial, but stuff a bottle in Spuds' mouth and make him chug it. How in the name of Benji the Hunted did Spuds get so popular? I can remember Spuds on t-shirts, coozies, and anything you could fit a dog's face on, plus little kids playing with a stuffed toy Spuds. AND, there was the whole breaking news story that someone saw him in the shower without his Panama Jack gear and that Spuds was actually a girl! Well, beer drinkers just wouldn't be duped like that and Spuds got dropped as the face of Bud Light advertising in 1989. Looking back, this commercial is some glorious '80s cheese and is way more funnier to me now than back in 1987.

Budweiser "Bud Bowl" (1989)
Call me crazy again, ("YOU'RE CRAZY AGAIN!!") but was Budweiser pitching their product to kids? The Bud Bowl was like when you and the neighbor kids got together and found random stuff to play with in the back yard. "Hey, my dad has a whole garbage bag full of empty beer bottles in the garage...let's pretend they're football players and play! Yeah, and we can make a stadium out of cardboard!" Now, had I been "of age" at the time when these series of commercials had came out and had kicked back a few Buds during the game, I probably would have thought this was a hilarious commercial. But would you place 8 hours worth of marketing dollars to get 3 seconds of Bud Bowl?? Never connected with me as a kid or now.

Okay, so I'm expecting some blowback for adding Spuds and the Bud Bowl to the list. So bring it! If you've got some worse Superbowl ads than those, let me know in the comments or I'll tell Bud Dry to give you a chop block. And be sure to check out RD80s' Best Super Bowl Commercials too...
Newer
Older
Powered by