From High School to the Superbowl!! 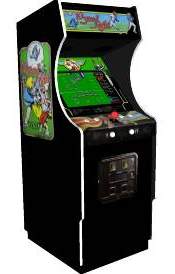 Finally, a realistic football arcade game...sort of. In 1984, the first football game featuring real-looking players entered the arcade. Up until that point, football fans were stuck with blips or "Xs & Os" on a screen to use as their quarterbacks. Also, some football video games had playing calling only with no control over the "players." 10-Yard Fight changed football video games forever, giving you control over a team of players. Although limited at the time, it would be the blueprint for its Tecmobowl and Madden ancestors in years to come. 10-Yard Fight was just that...a battle for 10 yards and a first down. There was no defensive play, just you, the quarterback, with a pair of running backs and a wide receiver to help you in your quest. And since you were only on the offensive side of the ball, 10-Yard Fight used a unique point scoring system instead of the standard team-versus-team scoring. The game also featured five modes of difficulty: High School, College, Professional, Playoff, and Superbowl. 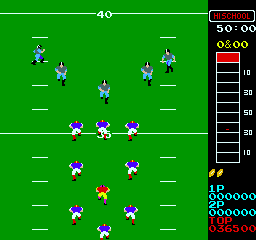 At the onset of the game, you would receive the kickoff with an 8 player team protecting you from would-be tacklers. (Always wondered why they had those 3 players below you, that basically were protecting you from open field.) Then, it was all about 10 yards. But if you didn't make a first down, it was a 10 yard penalty and a second chance. You could even throw an interception...for a 20 yard penalty. The quicker you got in the end zone, the more points you scored and then on to the next level. If the clock ran out before you scored, it was game over. Not exactly, the rules by what actual football is played, but 10-Yard Fight at least gave you players to control and the excitement of being a football quarterback. 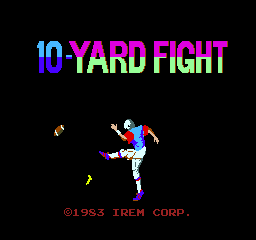 10-Yard Fight would be ported to the NES home console in 1985. There were some additions made to the home version of the game. Players could use both the offense and defense during the game and a simultaneous two player mode was also featured. But that would be the end of the road for the Grandfather of football arcade games. It would be surpassed by now football classics like Tecmo Bowl in 1987. But many arcade enthusiasts agree (including this one) that if not for 10-Yard Fight's appearance in the 80s arcade, Madden 2012 might look more like Bud Bowl 2012.