Baseball Movies in the 80s: The Natural 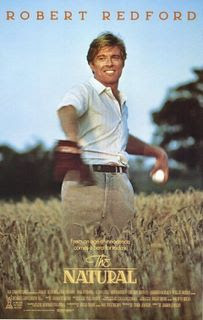 RD80s take:
Not many people get a second chance at their dream. Roy Hobbs gets his second chance and takes advantage of it to its fullest. I love the mystique of this movie, like the "Wonderboy" bat carved from the tree split by lightning and the amazing ability Roy has to hit the cover off a baseball. The Natural is also one of my favorite baseball movies depicted in the earlier years of baseball. The lasting image I always take from this movie is the home run trot around the bases with the sparks from the lights hitting the ground...

Roy Hobbs: Red, it took me sixteen years to get here. You play me, and I'll give ya the best I got.
Red Blow: I believe ya.

Roy Hobbs: I coulda been better. I coulda broke every record in the book.
Iris Gaines: And then?
Roy Hobbs: And then? And then when I walked down the street people would've looked and they would've said there goes Roy Hobbs, the best there ever was in this game.

Roy Hobbs: Pick me out a winner Bobby.

Thanks to BoxOfficeMojo, IMDB, and Wikipedia