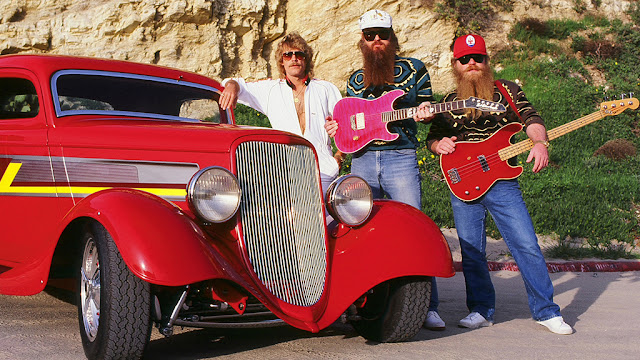 ZZ Top's Eliminator album will be forever associated with a cherry red hot rod. The album cover featured the famous shot of the front of the car with headlights beaming. Billy Gibbons commissioned Buffalo Motor Cars in Paramount, California in 1976 to build the customized 1933 Ford coupe. It was built with a Corvette-style engine fabricated by the So-Cal Speed Shop and finally finished in 1983. The car has become most recognizable for its red finish and ZZ Top logo graphics on the sides. Those of us who remember MTV as it was originally programmed can recall of those great music videos that seemed to give the hot rod fairy godmother type powers.

In the "Legs" video, a girl in many different situations gets hounded by about everyone she meets. Three babes that show up in the hot rod rescue the girl and transform her into 80s fashion style. Then with self esteem in check, she proceeds to "get revenge" on all the people who were giving her a hard time. The video would win an MTV music award for Best Group Video in 1984. Two other singles off the Eliminator album "Gimme All Your Lovin'" and "Sharp Dressed Man" would also featured the hot rod in the music videos. The ZZ Top hot rod is so ingrained into their persona that it currently sits at the Rock and Roll Hall of Fame!

Rolling Stone magazine lists the album as one of the "500 Greatest Albums of All Time." It's even been enshrined by artists. Ian Guy of Motoringartist.Com did an oil painting of the famous car with the "tres hombres" in the background. He actually got to meet Billy Gibbons in 2010 and got him to signed some prints of his painting. Click here to check out Ian's story and purchase a print.
Newer
Older
Powered by