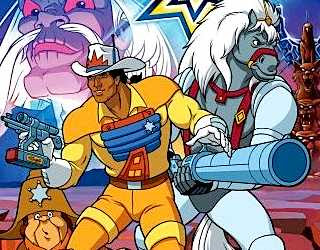 Cowboys keeping peace in the universe is not a new concept by any means. Before we had the 2011 Daniel Craig/Harrison Ford movie Cowboys & Aliens and before Joss Whedon debuted the Firefly series in 2002 and Serenity movie in 2005, three animated TV series in the late 80s introduced the space cowboy concept to many of us. Could it be that Whedon and writer Scott Mitchell Rosenberg drew inspiration from these shows? I'd like to think so, although I haven't found any evidence yet. But even if they hadn't been impacted, we who have enjoyed the recent space cowboy stories, probably also enjoyed at least one of these cartoon series after school in the '80s.

Adventures of the Galaxy Rangers

The first animated space cowboy series debuted on September 14, 1986. The Adventures of the Galaxy Rangers is considered by many as a breakthrough in animation, becoming one of the first anime style shows produced mainly in the US. In the year 2086, aliens travel to earth seeking help to combat the evil Crown Empire who have taken control of many planets in the universe. In exchange for assistance, the aliens give humans the ability of intergalactic travel through a hyperdrive device. As human activity grows in space, so does criminal activity and the Bureau for Extra -Terrestrial Affairs (BETA) is born. The Galaxy Rangers include Captain Zachary Foxx, soldier Shane "Goose" Gooseman, archaeologist Niko, and computer whiz Walter Hartford. These rangers had a Series-5 brain implant that when combined with the energy stored in their ranger badges allowed them to exert unique abilities like super strength or healing. The Adventures of the Galaxy Rangers lasted 65 episodes and would end its syndicated TV run in 1989. The show remains as an animated cult classic for its innovations of the time and its anti-toy selling stories. 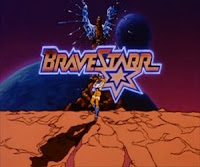 Filmation, the production company that brought us animation favorites like He-Man and the Masters of the Universe and Ghost Busters, blasted onto the space western scene in 1987 with Brave Starr. Galactic marshall Brave Starr and his side kick "techno horse" Thirty Thirty team up to protect planet New Texas and its valuable resources from villains. To fight these evil forces led by Tex Hex, Brave Starr is able to call on spirit animals which give him special powers like strength of a bear and speed of a puma. As with other Filmation shows, each episode also contained a moral lesson. The cartoon's original run lasted just five months and 65 episodes. A month after the show was cancelled, a feature-length film was released to movie theaters. It was only available in limited release and did not have much of an impact on the box office. A year after the movie release, Filmation closed down for good.

Saber Rider and the Star Sheriffs 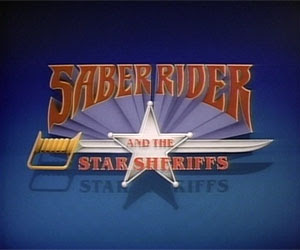 On Sept 14 1987, the same day as the Brave Starr debut, another space cowboy cartoon also made its debut. Saber Rider and the Star Sheriffs was a Japanese animated series that was converted to english by World Events Production, who also did the same for Voltron. As humans began populating other planets in the future, the Earth Calvary Command was created to protect settled planets and to keep the peace. The Star Sheriffs were a special group of field agents that were the hands-on crime fighters for Calvary Command. Their enemy is the Outriders, who use an army of robots to attack the humans and steal their resources. The Ramrod Equalizer Unit, a powerful prototype spaceship, was the main defense against the outsiders as it could turn into a powerful robot. Saber Rider is the captain of the Ramrod and would ride his robotic horse Steed into battle. He and the other Star Sheriffs main foe is Nemesis, the evil leader of the Outriders and the creator of Vapor Trail travel that allowed the Outriders to enter the human dimension from their own dimension. Saber Rider and the Star Sheiffs' original run lasted just over a year and 52 episodes. Voice talent for the show included some now famous actors like Peter Cullen, the voice of Optimus Prime in Transformers. One of the best features of the show was the music, scored by Dale Schacker. The opening title and music from the show were also produced into two soundtracks. More recently, Firehazard Studio announced a new video game is being developed based on the original series which was rumored to have a 2012 release.

Personally, I remember Brave Starr most out of these three short-lived 80s cartoons. I remember watching the show, but I unfortunately never had any of the toys or merchandise. I am happy to see that they are available on DVD (at pretty good prices compared to other complete series DVD boxsets,) for those of us who want to rediscover these great space cowboy shows from our childhood!