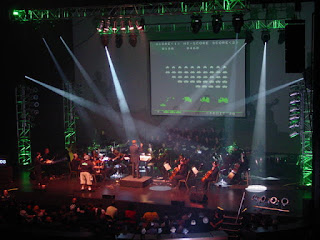 Those of us who grew up in the 8-bit era are fortunate to have first-hand experience of the evolution of video game music. What once was electronic and synthesized has now become a true orchestral experience like in the Halo and Call of Duty franchises. But for us retro gamers that have taken a step back to collect the arcade and console classics that we grew up with, the 8-bit music is the trigger that takes us back into pixel utopia.

PLAY!: A Video Game Symphony
Play! has been performing at sold-out concerts worldwide since 2006. They incorporate a full orchestra, choir, and visual experience into their shows truly bringing video games to life. They continue to tour featuring   video game music from the 8-bit era and recent day. Concerts performances have featured Zelda, Sonic, Metroid, and Castlevania. My favorite performance is their Super Mario Bros. medley which features music from the 8-bit era through some of the more current Mario games.

Video Games Live Orchestra
Video Games Live tout their video game music performances as "top orchestras & choirs performing along with exclusive video footage and music arrangements, synchronized lighting, solo performers, electronic percussionists, live action and unique interactive segments to create an explosive entertainment experience." Judging by the videos I've seen...I believe it. They have used music and footage from over 50 franchises and are the longest running and most successful video game music orchestra in the world. Their 2013 schedule includes many dates in the US and throughout the world. In 2008, they released their first concert soundtrack and have since followed it with their 2010 Vol 2 Blu-ray and surround sound concert experience that is unmatched in the industry. My favorite performance is the "classic arcade medley" that uses music from Pong to Punch-out!

I recently discovered the Super Guitar Bros. on YouTube and was really impressed with their performances. The classically trained "brothers" do so much with just two acoustic guitars and a video games "unplugged" atmosphere. Their choices have been great as well with medley performances of Castelvania, Metroid, and Ninja Gaiden. They recently got the opportunity to play at 11th annual Music and Gaming Festival (Magfest) in National Harbor, MD. My favorite so far, which I've shared on Twitter, is their Sonic the Hedgehog medley. Almost 9 minutes of Sonic tunes that really jolted some great memories of me playing on my Sega Genesis back in 1991.

College Marching Bands
Although we would never admit to our parents that we maybe skipped a class or two to play video games in college, a couple universities choose to embrace video games and incorporate their music as a part of their marching bands. Kansas State University in 2006 and the University of California in 2007 both put on great video game-themed halftime shows during football games. My favorite though has been a performance this past 2012 season by the Ohio State University marching band (which says alot coming from this Penn State fan.) The Space Invaders opening is awesome!