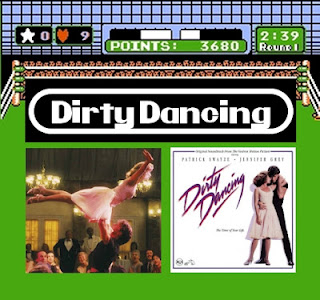 Can you imagine watching the Breakfast Club without hearing "Don't You Forget About Me?" Do you think of John Cusack holding a boombox over his head everytime you hear "In Your Eyes" on the radio? Movies and music go hand-in-hand, but if you had to choose just one...which would it be? Movie vs. Soundtrack Punch-out! will determine once and for all whether the movie or the soundtrack is better! Each bout includes a brief overview, a look at the commercial success of each and then, the legacy. And since I'm not the only voice in the 80s universe, a poll will be posted for everyone to cast their vote!

Dirty Dancing is a 1987 film that is set in the summer of 1963. Frances "Baby" Houseman (Jennifer Grey) and family visit an up-state New York resort for the summer, before Baby enters college in the fall. She gets invited to a secret after-hours party where she witnesses the "dirty dancing" for the first time. Her crush on the resort's dance instructor Johnny Castle (Patrick Swayze) develops even more after receiving quick lesson from him at the party. Baby also learns that Johnny's professional dance partner Penny is pregnant by a guy who is also dating her sister. Baby helps Penny get enough money together for an illegal abortion by asking her father, who doesn't know what the money will be used for. Subsequently, Baby becomes Johnny new dance partner and begins rigorously training for their performances. A romance ensues as they continue to train and perform. Eventually, the truth is made known about Penny's abortion and Baby's relationship with Johnny. Her father forbids them to see each other. But at the final performance of the season, Johnny returns after being kicked out of the resort and snatches Baby from her now famous "corner" seat. He proclaims that he is a better man because of Baby...err "Frances." Johnny and her dazzle the audience one more time, finally achieving "the lift" part of their routine for the first time. 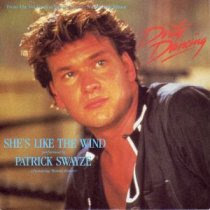 The soundtrack featured a mix of early 1960s doo-wop hits with current tracks at that time. Artists like the Ronettes, Maurice Williams and the Zodiacs, and Bruce Channel continued the 60s feel from the movie while The Blow Monkeys, Eric Carmen, and Patrick Swayze himself added the modern feel. Of course, the most famous scene of movie where Johnny and Baby do the lift at the end uses the Bill Medley & Jennifer Warren track "(I've Had) The Time Of My Life." The song made it one of the most memorable scenes of 80s films and beyond, winning the Academy Award in 1987 for best original song. Swayze's single "She's Like The Wind" was actually not intended for the movie. He co-wrote the song for the 1984 film Grandview, U.S.A. for which he co-starred with Jamie Lee Curtis and C. Thomas Howell. The track was not used in the film and Swayze played the demo to the producers of Dirty Dancing. They liked the song and immediately turned it over to the soundtrack producers.

The film made over $63 million total at the box office, nearly cracking the top ten movies of 1987. Although it opened at #3, the film gained momentum after its second week and would reach its peak at #2 for two consecutive weeks. It would remain in theaters for 19 weeks. The soundtrack was enormously popular, sitting atop the Billboard charts for 18 consecutive weeks and selling over 11 million copies to date in the US alone according to the RIAA. It produced three top 5 singles, Eric Carmen's "Hungry Eyes" and the two aforementioned tracks. Worldwide, the album is 8th best selling album of ALL TIME with over 42 million units sold. 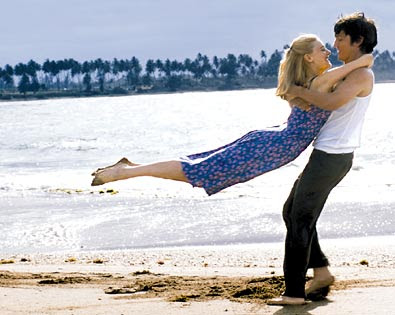 In 1988, another soundtrack album was released entitled More Dirty Dancing, which was mainly a large collection of oldies including hits like "Wipe Out" and "Some Kind of Wonderful." The 20th Anniversary release of the soundtrack in 2007 combined both soundtracks into one and also featured a DVD of the music videos from the original tracks. Also in '88, CBS adapted the movie into a TV series that lasted just eleven episodes. 2004 marked two more points in the film's legacy. A stage adaptation of the film as a musical began overseas and continued through North America until 2009. No Broadway plans have been announced. Also a prequel to the film, Dirty Dancing: Havana Nights was released as a "re-imagining" of the original film. It barely made back it's budget through worldwide sales and holds a 23% rating on RottenTomatoes.Com In August 2011, Lionsgate films announced it would remake the orignal film, and according to Rotten Tomatoes, the film is scheduled to be released July 2013.

This is a tougher choice for me than you would think. I'm actually not that big of a fan of either the movie or the soundtrack. This movie is another I didn't see until in the mid '90s. I actually don't think it's a bad movie, but not in my 80s top ten or anything. The movie has a couple great things going for it in the highly quoted "Nobody, puts Baby in a corner" line and the iconic lift scene at the end. But out of sheer respect, I'm giving this bout to the soundtrack via technical knockout. The soundtrack lineup is not all that strong but it's hard to deny the overwhelming popularity of it. 42 million units sold worldwide and 2nd best selling soundtrack of all time behind the Bodyguard...are you kidding me? The term "gangbusters" comes to mind. So there you have it, via TKO, the soundtrack wins it for me.

Agree? Disagree? Let me know your choice in the comments! If you simply can't decide...you can always vote for both!
Newer
Older