The Holy Grail of Shopping Sprees 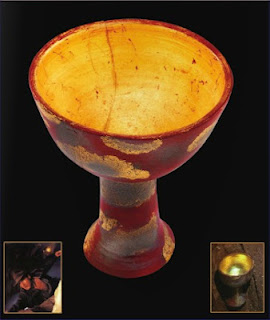 The Holy Grail of Shopping Sprees

This week's assignment for the League: This week we’re going to try something a little different–we’re going shopping! Here’s a blank check, now head over to the Profiles in History Dreier Collection auction and buy something nice for the cave. (You can buy more than one item, but leave some for the rest of us.) (((DROOLING))) ...a blank check to fill the RD80s man cave! I'm a huge fan of Hollywood Treasure on the SyFy channel and being able to bid live at one of their auctions would be a dream come true. This upcoming auction is incredibly large with a 220 page catalog of movie costumes, props, and collectibles! But since I have to leave some items for my fellow LEB members, I'm going to see how well I can do on a budget of $50,000 and using the average of the estimated auction price range. I've scanned the catalog...now it's time to get the items at the top of my list!!

Item 241 - Grail cup from Indiana Jones and The Last Crusade

How could I let the"holy grail" of 80s movie props get away! Now, the auction also has a screen-worn fedora that I would easily choose above of the grail....however, it's from the most recent Indiana Jones movie. (PASS!) Other auction items available from the Last Crusade include the grail tablet, costumes worn by Harrison Ford & Sean Connery (see image), and the knight's sword. From the Temple of Doom, you can buy one of the Sankara stones, Kate Capshaw's dress, or a vast array of swords and guns. Very nice start to any IJ collection, but c'mon...it's the holy grail! If you are gonna get one item to represent your love for the Indy films, would you rather say "I have a Sankara stone" and have to explain to your parents that you don't need a painful medical procedure to remove it? OR would you rather announce "I have the holy grail!!" PRICE TAG - $10,000

This is why I passed on the IJ fedora...can you imagine wearing this hat? This is what I would call "the epitome of bad." Being the 80s music fan that I am, owning any Michael Jackson memorabilia would be a must. As soon as I turned the paged in the catalog, I instantly recognized the fedora from the "Smooth Criminal" video. I wonder if it comes with a little Frosty the Snowman magic, that when you put it on it could make you dance like "the King of Pop?" Now, if I hadn't put that spending limit on my little shopping spree, I'd be bidding on MJ's complete costume from the Bad world tour that's also available in the catalog. But at a price tag of $200-300k, I'd need a long stare at the man in the mirror before spending that much on a single item. PRICE TAG - $5,000 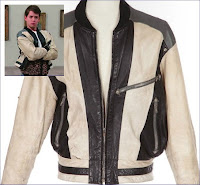 Well, now that I own a hat, I figure a leather coat would be good addition to the shopping spree! Just imagine, the Bueller swag with Michael Jackson moves...unstoppable. I think if I actually owned this jacket, my next stop after the auction would be the nearest Barret-Jackson auction, hoping to find a 1961 Ferrari 250 GT California. (I've heard less than a hundred were made and can take up to three years to restore.) Then again, while I'm dropping down some mad cash for Ferris collectibles, I wonder if this is still for sale. PRICE TAG - $25,000

Sadly, my budget for the holy grail of shopping sprees has all but been used up already with so much more available that I really want! There is the Edward Scissorhands costume worn on-screen by Johnny Depp at a cool price tag of $60-80 thousand. I'd love to have the Storm Shadow costume from G.I. Joe Rise of Cobra, just so I could feel what it's like to be a ninja. Or better yet, Michael Keaton's Batman suit from Batman Returns, but I'd be spending my whole allotment of funds at $30-50 thousand. The Storm Shadow costume would keep my wallet a little heavier, plus I could throw in the Baroness and Scarlett costumed and have a party for about $7 thousand! There is also Ponch's uniform from CHiPs? Anyone? Anyone? I might go for it, if the bidding started low on the $5,000 estimated price, but then I'd have to buy a highway patrol bike or people might start asking if I joined a 70s disco band. But anyway, I've got $7k left to maybe find a couple smaller items for my living room.

How cool would it be to have these items on your mantle when company comes over??!! OK, so the moonman is from 1999, but it's one of those images that just reminds me of the time when veejays ruled our sets. A moonman on the mantle and on the wall above, a framed newspaper of the White House surrendering to Zod. You won't see that in the Daily Planet again (well, at least until the sequel of the latest Superman reboot.)
PRICE TAG - $3,000 TOTAL

Well, by my calculations I still have $4k left in case someone tries to bid me up on these items. I think I did pretty well, as far as 80s collectibles go. Michael Jackson's fedora and Ferris Bueller's jacket, plus the holy grail from Indiana Jones & The Last Crusade and an MTV Movie Award side-by-side on the mantle with a framed Daily Planet hung above! Tell me how I did in the comments or visit the auction catalog by clicking any of the photos and tell me what you would choose!!


Here are more Leaguers anxious to spend that blank check:
GreenPlasticSquirtGun wants to improve his trading card collection.
GeekUntilItHurts might be the biggest Stargate fan on the planet.
ShezCrafti apparently has a thing for Johnny Depp.
Newer
Older