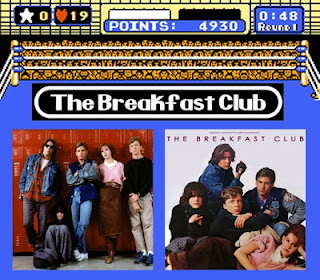 Can you imagine watching the Breakfast Club without hearing "Don't You Forget About Me?" Do you think of John Cusack holding a boombox over his head everytime you hear "In Your Eyes" on the radio? Movies and music go hand-in-hand, but if you had to choose just one...which would it be?

"Movie vs. Soundtrack Punch-out!" will determine once and for all if the movie or the soundtrack is better! Each bout includes a brief overview, a look at the commercial success of each and then, the legacy. And since I'm not the only voice in the 80s universe, a poll will be posted for everyone to cast their vote! 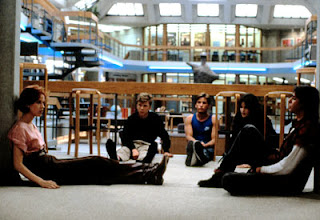 The Breakfast Club is a 1985 comedy/drama film about five high schoolers forced to sit through an 9-hour Saturday detention. Each student comes from a different clique, describing themselves as "an athlete (Emilio Estevez), a brain (Anthony Michael Hall,) a basket case (Ally Sheedy), a princess (Molly Ringwald,) and a criminal (Judd Nelson.)" Principal Richard Vernon (Paul Gleason) requires them to write a 1000-word essay on "who you think you are," returning to check on them throughout the day. With nothing in common, the students beginning mocking and harassing each other on a variety of topics including school activities, parents, and virginity. Eventually the students open up after getting past their surface stereotypes and connect on peer-to-peer level. They are afraid that after the Saturday detention that they will go back to the way the were, maintaining status with their respective cliques. That fear is somewhat crushed when four of the student are shown as couples now and exchange a kiss at the end of the movie. It's decided that "the brain" should write one essay for all of them to give to Vernon. Brian expresses that Vernon has already made up his mind with preconceived judgments of "who they are" and refuses to explain themselves anymore. He signs the letter..."The Breakfast Club." 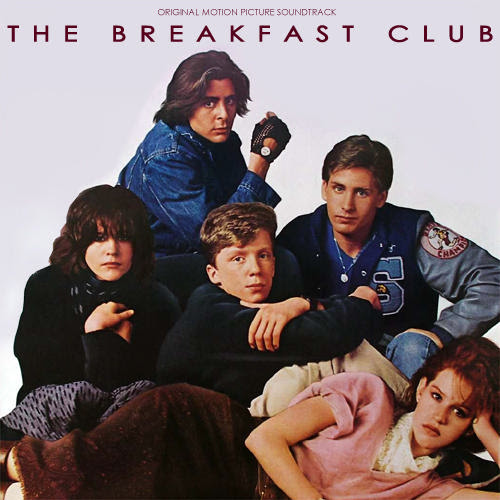 The soundtrack is mainly known for the Simple Minds song "Don't You (Forget About Me)," which is played during the opening and closing sequences of the film. It's one of the most iconic and recognizable songs from the 80s, even apart from the film. The soundtrack also features Karla DeVito's "We Are Not Alone," which is the background for the upbeat dance sequence that showcases the cast's best moves. Another great track is "Fire in the Twilight" by Wang Chung which can be heard when they are on the run from principal Vernon in the school halls. The composer for the Breakfast Club soundtrack album is Keith Forsey, who produced other well-known soundtracks in the 80s including Flashdance and Beverly Hills Cop II. He also co-wrote the Simple Minds track and is also well known for producing albums for Billy Idol.


The film made over $45 million total at the box office on an estimated budget of $1 million, making it the 16th most popular movie of 1985. It remained in theaters for 10 weeks, hold the #3 position for 4 out of its first 5 weeks at the box office. The film maintains a 91% certified fresh rating at RottenTomatoes.com. The album was not a tremendous commercial success, however it did reach gold status according to the RIAA. Simple Minds benefited the most from the album, achieving their only #1 single on the US Billboard chart and reaching the top 7 in nine other countries with their single "Don't You (Forget About Me.)" Even though they played an essential role in the film, none of the other tracks charted. 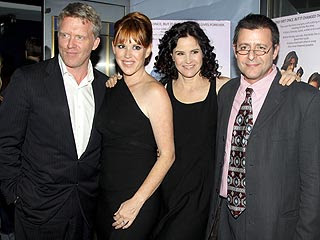 The Breakfast Club cast has reunited several times over the last 7 years. The MTV Movie Awards honored the 20th anniversary of the film with its Silver Bucket of Excellence in 2005. The cast including Paul Gleason and janitor John Kapelos (except Emilo Estevez who had prior commitments and a short appearance by Judd Nelson) attended the show. More recently in 2010, the cast (again minus Estevez, filming in Canada) attended a 25th anniversary presentation of the film in New York City. Earlier that same year, the four members plus Jon Creyer, Matthew Broderick, and Macaulay Culkin attended the Academy awards to pay tribute to the film's director John Hughes after he passed away. The original film has not been attmepted to be remade (thank the Lord above.) In 2006, a documentary film was made as a tribute to Hughes' legacy entitled Don't You Forget About Me. It was released in 2009 after Hughes' unexpected death. None of the tracks from the soundtrack have formally been covered and released.

This was an easy choice for me. As much as I'm in love with '80s music, the film definitely made more of an impact on me than the soundtrack. The scenes are heavily accentuated by the music and the Simple Minds track would easily make my top ten list of soundtrack favorites, but the characters and the message of the film have given it such a lasting legacy. I recently re-watched the film and apart from a few references, it easily holds up today as well as it did when I first watched it in the late '80s.

Agree? Disagree? Let me know your choice in the comments! If you simply can't decide...you can always vote for both!
Newer
Older
Powered by